Home Breaking News Al-Houthi: Homeland is for all, No one can be canceled or marginalized 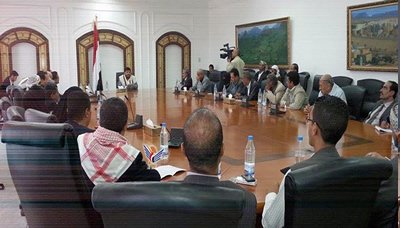 The Supreme Revolutionary Committee Chairman,  Mohammed Ali al-Houthi, met the members of the Civil Alliance for Peace and National Reconciliation in Sana’a.

In the meeting, al-Houthi pointed out that the political components were about to make the political solution, but the Saudi regime launched its brutal aggression on Yemen and hindered the political process stated by the UN envoy Benomar in the UN Security Council.

He stressed that the fighting is imposed on the Yemeni people to defend  their country in the face of the invaders that want to occupy the country, “committee “National reconciliation is a victory for all Yemenis, and Yemen is for all no one can be canceled or marginalization of any component.”

Chairman of the Revolutionary Committee expressed his willingness to cooperate with the Civil Alliance for Peace and National Reconciliation to protect the national gains and constants and build a sovereign and stability in the state.

For his part, the chairman of the Civil Alliance for Peace and National Reconciliation Abdulrahman al-Olfi stressed the importance that all political parties have to be one hand to build Yemen far from the foreign interventions.