Home Local News Does U.S. expect the Saudis to reinstate an individual who was incapable... 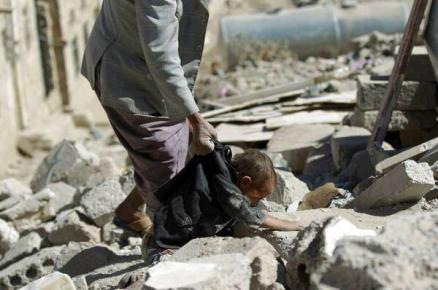 On March 26, a 29-year old newly appointed Minister of Defense for Saudi Arabia ordered a bombing campaign over Yemen that, up to this point, has left several thousand Yemenis dead, destroyed much of the country’s limited infrastructure, left Yemen without electricity and millions of Yemeni men, women and children facing a desperate situation with little access to drinkable water, food and medical care. This is no video game, but a callous and inhumane use of wealth to devastate a neighbor with the most sophisticated weapons that billions of dollars in oil wealth can buy. The weapons manufacturers are smiling, their champagne toasts to be heard in the most expensive hotels.

Enough of the ideological proxy politics and blaming the Houthis, as though they are some group of terrorist hoodlums trained by the Iranians. If the Saudis really think Iran is their major enemy, then let them send their fighter jets to Iran, where at least they would have a foe capable of responding in kind. Yemen does not pose a threat to Saudi Arabia or any other country in the Arabian Gulf.
It is the poorest country in the region, barely limping along on a limited supply of oil and gas exports. Indeed it has a well-armed population with small arms, but their military arsenal consisted mainly of out-of-date Soviet tanks and a few airplanes that have now been destroyed.

A look at history would note that Yemen never attacked the emerging Saudi state, but indeed it was Ibn Saud who forcibly wrested control of the Asir region and annexed Jazan and Najran as well from neighborly control of the Zaydi imamate. The tribes here were closely allied with Yemeni tribes to their south, not with the Bedouin of Najd. In 1934 Saudi forces occupied Hodeidah and were threatening to loot the local Indian merchants who were fortunately protected by the British. The Saudi incursion led to a famine in Sana’a where Saudi forces attempted to go but faced fierce resistance by the Zaydi imam’s forces. Déjà vu some 80 years later, but this time no one is protecting Yemen but the Yemenis themselves.

The critical humanitarian crisis overshadows any rationale for the continued bombing of Yemen. The oxymoron of a one-sided war called “Operation Decisive Storm” deserves rebuke. It has been a destructive and devastating storm, a tsunami against the Yemeni people, a hurricane off the charts, but not “decisive” in any way. After two and a half months of continuous bombing and bringing Yemen’s entire economy to a halt with an illegitimate blockage of even humanitarian supplies, the alleged target of the bombing remains in place and has gained far more sympathy than it would have otherwise in the north. The southern part of Yemen is now largely in the control of or sympathetic to Ansar Shariah, the metamorphosis of al-Qaida, making Yemen a far more fertile ground for terrorism than was the case before (when the Houthis were attempting to rid the country of al-Qaida terrorism). This is a war with no exit strategy from the start and still no real end in sight. Some things money cannot buy, although this war is buying a deep hate that is not likely to disappear soon.

And the world is standing by as though the loss of life and utter destruction in Yemen means nothing! Must the death toll top the ten thousands to get attention? Must we wait for future historians to say how ludicrous this air war has been? Where is the concern of the Western leaders who are suppliers of the billions worth of weapons, intelligence and naval ships to aid a war that no sane person can see as working? What happened to the vaunted principles of human rights when virtually the entire population of Yemen, which is human, is suffering from this war and blockade? Does the U.S. really expect the Saudis to reinstate an individual who was incapable of governing Yemen and is now seen as nothing more than a puppet of the Saudis? What kind of a Ramadan is in store for Yemen, the month that the Prophet Muhammad declared a holy month of truce? Or is the sacred site of Mecca now only for expensive hotels and boutique shopping malls rather than standing for the principles that founded Islam as one of the world’s great religions?

I do not write against the Saudis, a vibrant society that is more diverse than the media suggests, but against a failed political strategy, one that is exacerbating tensions within the Islamic world rather than bringing Muslims together. Everyone who hates Islam is pleased to see the Sunni vs. Shi’a game played out with on-going deaths to both sides. More damage is done to the image of Islam around the world by this internecine sectarian violence than any colonial control or Orientalist discourse could ever do. History has a lesson here; when the Protestant Reformation (an oxymoron outside doctrine) hit Europe, the results on the ground were catastrophic; Catholics and Protestants killed each other as though the idea of Christ as a peacemaker never existed – politics ruled the day, not theology.

The partisan framers of this war need to seriously read the Sira of the Prophet Muhammad who returned in triumph to Mecca after exile in Medina without widespread bloodshed; it is reported that only a dozen of the hard-line Quraysh were killed in the limited fighting. In a hadith of the Prophet, Muhammad said that no one had a right to wage war in Mecca after him and he had only been granted that right (which he did not need to exercise) for a limited time (Sahih Bukhari, Volume 5, Book 59, Number 603). There is a more telling hadith relevant to the current conflict, when the Prophet Muhammad said that faith (iman) comes from Yemen. It may not be a pleasant reading for those who manipulate Islam to promote their own family interests and think luxury is God-given, but here are the Prophet’s words, as narrated by Abu Hurayra: “The Prophet said, ‘The people of Yemen have come to you and they are more gentle and soft-hearted. Belief is Yemenite and Wisdom is Yemenite, while pride and haughtiness are the qualities of the owners of camels (i.e. Bedouins). Calmness and solemnity are the characters of the owners of sheep.’ (Sahih Al-Bukhaari, Book of Military Expeditions, Hadith No. 4070).