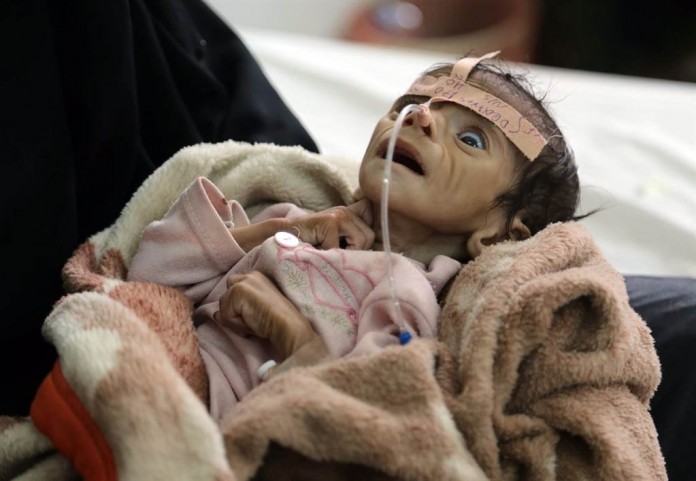 The baby was born in war, even as planes blasted his village in Yemen. Five months later, Udai Faisal died from war: his skeletal body broke down under the ravages of malnutrition, his limbs like twigs, his cheeks sunken, his eyes dry.

He vomited yellow fluid from his nose and mouth. Then he stopped breathing.

“He didn’t cry and there were no tears, just stiff,” said his mother, Intissar Hezzam. “I screamed and fainted.”

The spread of hunger has been the most horrific consequence of Yemen’s war since Saudi Arabia and its allies, backed by the United States, launched a campaign of airstrikes and a naval blockade a year ago. The impoverished nation of 26 million people, which imports 90 percent of its food, already had one of the highest malnutrition rates in the world, but in the past year the statistics have leaped.

The number of people considered “severely food insecure” — unable to put food on the table without outside aid — went from 4.3 million to more than 7 million, according to the World Food Program. Ten of the country’s 22 provinces are classified as one step away from famine.

Where before the war around 690,000 children under five suffered moderate malnutrition, now the number is 1.3 million. Even more alarming are the rates of severe acute malnutrition among children — the worst cases where the body starts to waste away — doubling from around 160,000 a year ago to 320,000 now, according to UNICEF estimates. Exact numbers for those who died from malnutrition and its complications are unknown, since the majority were likely unable to reach proper care.

The fighting and the heavy barrage of airstrikes have killed more than 9,000 people, including more than 3,000 civilians, according to the U.N. Human Rights Office.

Around 2.3 million people have been driven from their homes. Strikes have destroyed storehouses, roads, schools, farms, factories, power grids and water stations. The naval blockade has disrupted the entry of food and supplies.

The ripple effects from war have tipped a country that could already barely feed itself over the edge. The food, fuel and other supplies that do make it into the country are difficult to distribute because trucks struggle to avoid battle zones or need to scrounge for gas.

The fate of Udai illustrated the many factors, all exacerbated by war, that lead to the death of an infant.

His family lives off the pension that Udai’s father, Faisal Ahmed, gets as a former soldier, about $200 a month for him, his wife and nine other children ranging from 2 years old to 16. He used to sometimes get construction work on the side, but those jobs disappeared in the war. With food prices rising and supplies sporadic, the family eats once a day, usually yoghurt and bread, peas on a good day, said Udai’s parents, both in their 30s.

The day Udai was born, warplanes from the Saudi-led coalition were striking an army base in their district of Hazyaz, a shantytown on the southern edge of Sanaa. Shrapnel hit their one-floor, one-bedroom house where Udai’s mother was in labor.

“She was screaming and delivering the baby while the bombardment was rocking the place,” the father said.

Hezzam was able to breastfeed her newborn son for about 20 days, but then her milk stopped, likely from her own malnutrition. Even after childbirth, she had to collect firewood for the mud brick stove at the doorstep of her house. Like much of the country, electricity has long been knocked out in their neighborhood, either because of airstrikes or lack of fuel, and there’s rarely cooking gas.

“I go every day to faraway places to search for the wood then carry it home on my head,” she said.

The family turned to formula to feed Udai, but it wasn’t always available and they couldn’t always afford it. So every few days, Udai would get formula and the other days he would get sugar and water. Water trucks occasionally reach the area, but often they had to use unclean water. Even before the war, more than 13 million people in Yemen didn’t have regular access to clean water, and in the past year that has risen to more than 19 million, nearly three-quarters of the population.

Within three months, Udai was suffering from diarrhea. His father took him to local clinics but was told they couldn’t treat him because they didn’t have supplies or he couldn’t afford what they did have. Finally, on March 20, he made it to the emergency section at Al-Sabeen Hospital.

The tiny infant was suffering from severe malnutrition, diarrhea and a chest infection, said Saddam al-Azizi, head of the emergency unit. He was put on antibiotics and a feeding solution through the nose.

It was at hospital that the AP saw Udai on March 22. His arms were constantly convulsing, his emaciated legs motionless, his face gaunt and pale. When he cried, he was too dehydrated to produce tears. At around five months old, he weighed 2.4 kilograms (5.3 pounds).

“Unstable,” his chart read for every day he’d been there.

Two days later, his parents took him home from the hospital. His father told the AP it was because the doctors told them it was hopeless, and he complained the staff was not giving him enough treatment. Al-Azizi said he suspected it was because the family couldn’t afford to pay for the medicines. The stay at the hospital is free, but because medicines are in such short supply, families must pay for them, he said.

“It was a mistake to take him out,” he said.

The treatment needed time to work. Still, al-Azizi had given Udai only a 30 percent chance of survival.

Al-Sabeen was already dealing with dozens of other malnourished children. In the first three months of the year, around 150 children have come to the hospital suffering from malnutrition, double the number in the same period last year, al-Azizi said. Around 15 died, not counting Udai.

Some parents had managed to get there from remote parts of the country. One woman described walking for four days from her mountain village outside Sanaa, carrying her emaciated daughter, who at two years old weighed only four kilograms (8.8 pounds).

Mohammed Ahmed had to bring his son here from the city of Ibb because the hospital there had no supplies. He drove the 90 miles (150 kilometers) while warplanes struck in the area. “We arrived after a long and torturous trip,” he said. His 10-month-old son Marwan, after 15 days in the hospital, now weighs 3.5 kilograms (7.7 pounds).

Even pre-war transportation infrastructure was poor, and now trucks often can’t get through battle zones. Drivers fear getting hit by airstrikes or have to scrounge to obtain expensive gas.

Hospitals are short of fuel to keep generators running, and have been hit by airstrikes. In the battlefield city of

“This is before the war,” he said, holding up his 2-year-old son Shehab to show the difference between a child born before the war and after.

They buried the infant at the foot of the mountains nearby. His father read the Quran over the tiny grave marked only by rocks, reciting, “On God we depend.”