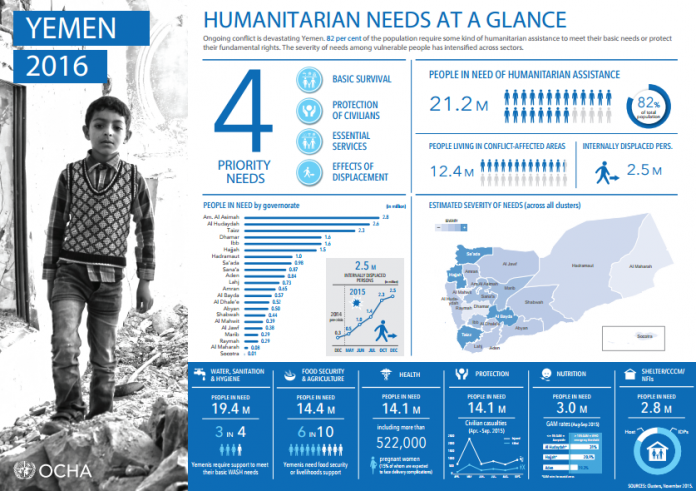 World Socialists Web Site(WSWS) that is Published by the International Committee of the Fourth International (ICFI) said that one year since the launch of the us-backed war the majority of Yemen population without reliable food, water and sanitation.

“More than 80 percent of the Yemeni population is confronting a desperate humanitarian catastrophe as the US-backed Saudi war against Yemen, launched in March 2015 as “Operation Decisive Storm,” enters its second year,” said  Thomas Gaist the WSWS reporter.

He added “Half of Yemen’s 22 provincial divisions face famine conditions. Some 20 million Yemenis are without reliable access to the most basic goods and services, including food, water and sanitation. More than 2.5 million have been displaced, 6,400 killed, and 30,000 wounded during the Saudi-led campaign, according to the latest UN statistics.”

Humanitarian groups reduced food rations by 75 percent as a result of a massive shortfall in funds. The “international community” has provided only 12 percent of the $1.8 billion in aid requested by the UN.

According to WSWS report “The year-long Saudi war has targeted Yemen’s population and social infrastructure as a whole, producing a sociocide easily comparable to those perpetrated against Iraq and Libya by the US and European powers.

The US-backed Saudi forces routinely have targeted civilian areas throughout the war. A January UN report found that bombing of civilian targets has been “widespread and systematic.”

Saudi planes have carried out at least 119 bombing missions against civilian targets that constituted violations of international law, according to the UN panel. Saudi strikes killed more than 150 civilians in the past few weeks alone, according to UN Human Rights Chief Zeid Ra’ad Al Hussein.

“As a result of this bloody onslaught nearly 2 million Yemeni children have lost access to education and more than 600 medical facilities have ceased operations. ”said Thomas Gaist.

The report also pointed out that For all the bloodshed and destruction, the US-backed Saudi coalition has failed to achieve its utterly reactionary objective of restoring the government of Abd Rabbuh Mansur Hadi. Hadi, a US-Saudi puppet imposed through a stage-managed “democratic transition,” was himself brought to power in an effort to stabilize the country amid the mass struggles that rocked the Middle East and North Africa in 2011.

Gaist confirmed that the ferocity of the violence against Yemen is an expression of the country’s immense geopolitical significance. Hadi’s overthrow by  Houthis threatened to break the US-Saudi grip over a country which, despite its poverty, is essential to the world strategy of US imperialism.

“Yemen’s coastline overlooks the Bab el-Mandeb straits, which enable passage of 3.2 million barrels of oil per day between the Indian Ocean and the Red Sea. The straits are among the most crucial commercial chokepoints globally, and are central to Washington’s plans for war against China, which include plans to blockade and strangle the Chinese economy,” reported in WSWS.

Gaist confirmed that US imperialism bears ultimate responsibility for the destruction of Yemen. From the first days of the war US aircraft have been providing mid-air refueling in support of the Saudi coalition bombing runs, and US military and intelligence officers advised Saudi counterparts on target selection and strategy from a joint planning center in the Saudi capital.

Gaist ended the report by the ongoing slaughter in Yemen illustrates quite starkly that there are no limits to the barbarism which the US ruling class is prepared to employ in its efforts to control the entire planet.