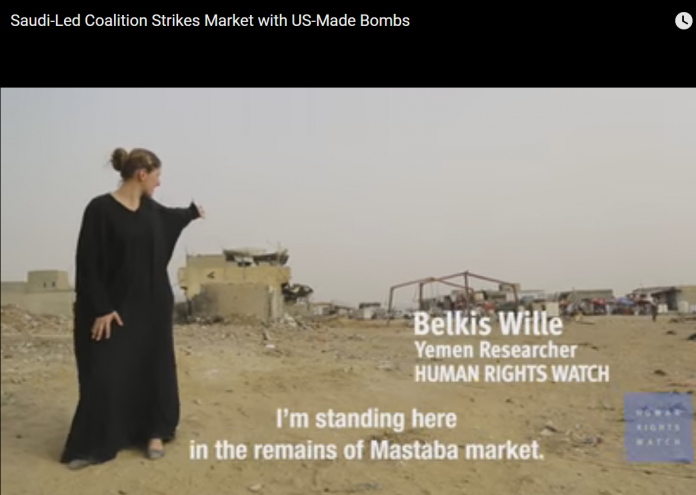 “There is no team from Human Rights Watch on the ground,” Saudi military spokesman Gen. Ahmad al-Assiri told National Public Radio (NPR) in an interview that aired on May 16th .

He was responding to a question about a March 15, 2016 airstrike on a market in the northern Yemeni town of Mastaba that killed at least 97 civilians.

Belkis Wille, researcher with Human Rights Watch, responded to his accusation saying ” a colleague and I had visited the site in late March and found remnants of a United States-supplied 2,000 pound bomb, one of several used in the attack. We even shot a video in the demolished market. On camera I say, “I am standing here in the remains of Mastaba market.”

She added that the Human Rights Watch published a report on the findings, calling on the Saudis to investigate the apparently unlawful attack – a possible war crime. “It was one of the deadliest single attacks in the campaign by the Saudi-led coalition to oust northern Houthi  and their allies from the capital, Sana’a, and other areas. At least 3,000 civilians have died over the past year, most from airstrikes” she said.

“No,” al-Assiri responded. “No one gets to Yemen without permission of the coalition.” He added that he hopes “Human Right Watch and the other NGOs [nongovernmental organizations] come to the coalition for permission. We will send them down to investigate.”

Belkis Wille said  “In fact, this two-week trip was the fourth I had made to Yemen since the beginning of the war in March 2015. Given what I go through to get into Yemen, al-Assiri’s statement was laughable.”

Wille added that since the war started, all Yemenia Airway flights to Sana’a touchdown in Saudi Arabia, where Saudi immigration officers board the plane, search the baggage, and selectively question passengers. Each time,  she  insisted that she was one of the only passengers to have my passport confiscated for the layover, without a word of explanation. “The Saudis know every time I visit Yemen,” she confirmed.

But there’s nothing laughable about the situation in Yemen. Over the course of her trips, she have investigated dozens of airstrikes by the coalition that have killed at least 670 civilians, as well as other serious abuses by all the parties to the conflict. We and other human rights groups have been on the ground investigating them. Saudi Arabia and its coalition partners have an obligation under the laws of war to investigate alleged violations by their forces – but there’s no indication they’ve done so.

According to HRW report, general al-Assiri has been in Washington, DC this month, no doubt to drum up support for resupplying the bombs dropped on Mastaba and elsewhere, and other weapons. There’s no reason to believe that what he says about alleged coalition atrocities is any more accurate than his portrayal of Human Rights Watch investigations. US lawmakers genuinely concerned about the well-being of the Yemeni people, and how they view the United States, might want to keep this in mind.