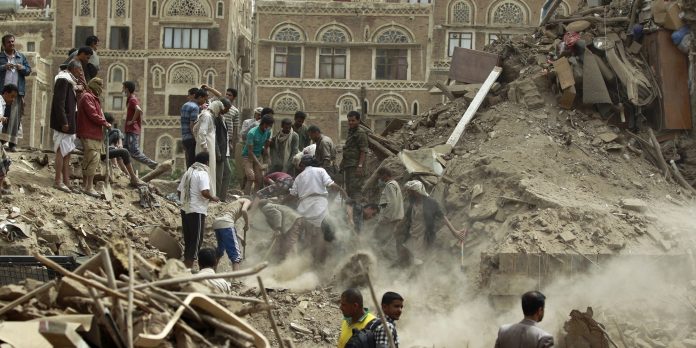 With so much bloodshed occurring in the Middle East, media coverage of the conflict in Yemen often takes a backseat to those in Syria, Iraq, and Libya. But Yemen’s war is causing horrific destruction and misery for its people. Around 10,000 Yemenis have been killed, many of them civilians, and those that survive face starvation and a lack of water, electricity, and medical care.

The U.S.-backed Saudi Arabia-led coalition has been fighting Yemen since March 2015, after the Houthis ousted the country’s Saudi-supported president, Abd-Rabbu Mansour Hadi. A Saudi blockade and coalition air strikes have brought about much of the suffering, with little humanitarian aid getting through and a third of strikes hitting civilian sites.

Some of these strikes on civilians have targeted Yemen’s historic buildings, including houses in such cities as Sa’ada in the north and the capital, Sana’a, to its south.

Sana’a is one of the oldest continuously inhabited cities in the world. Its more than 6,000 tower houses, built centuries ago, are particularly admired for their gingerbread-style exteriors patterned with fired bricks and white gypsum. “They are architectural jewels,” Michele Lamprakos, a University of Maryland architecture professor who has written a book on conservation efforts in Sana’a, tells CityLab.

A number of these Sana’a houses are among the at least 75 historic sites that have been damaged since the beginning of the war. In June 2015, coalition strikes destroyed five houses. In September 2015, 10 members of the same family were killed in a strike that pummeled the tower house in which they lived. And earlier this month strikes hit the headquarters of the National Security Bureau, damaging neighboring homes.

Lamprakos says that the destruction of houses in such a dense and cohesive area threatens the city’s broader structure. “The houses are part of an integrated urban fabric,” she says. “They are grouped around gardens, which lie at the heart of religious complexes. The bombings leave gaps in this fabric, endangering buildings on either side and making the damage potentially progressive.”

It’s not the first time that the capital’s precious buildings have been threatened. In the 1970s, the introduction of amenities into the old city, such as plumbing, caused structural problems. Piped water was installed, but no drainage, precipitating rising groundwater, which led to collapsed tower houses. Local and foreign architects convinced Yemen’s government to put Sana’a up for UNESCO World Heritage Site status, with the aim of applying conservation practices to the city’s continued development. UNESCO carried out an international safeguarding campaign, and in 1986 granted the entire old city of Sana’a this status.

Lamprakos notes that until the current conflict, three and a half decades of sustained conservation activity had taken place, with architects, engineers, builders, craftsmen, and advocates dedicating themselves to the work. “The old city has become a source of local pride,” she says. “It represents a living building tradition.”

Unlike many preserved historic cities in Europe and the United States, Sanaa’s old city has not been gentrified. The Yemenis who live there are often poor, and rent rather than own. The lack of wealth among the area’s residents could make it even harder to return structures to their former glory after the conflict, not to mention survive it in the meantime.

Moreover, Yemen, as one of the poorest countries in the Middle East, had already been in dire straits before the war. With the country’s water supply as well as its oil production—upon which Yemen depends for its limited income—dwindling, living conditions were already deteriorating.

The conflict has made this situation worse. With peace looking like it will be a long time coming, for the foreseeable future Yemen’s people simply need the basics. Only when food, water, and medicine are available can more long-term planning occur, including the restoration of Sanaa’s stunning historic houses.

“In times of conflict, the first priority is human life,” says Lamprakos. “But when the historic fabric of the city is targeted, it’s the soul of a people, of a community, that’s being targeted.”