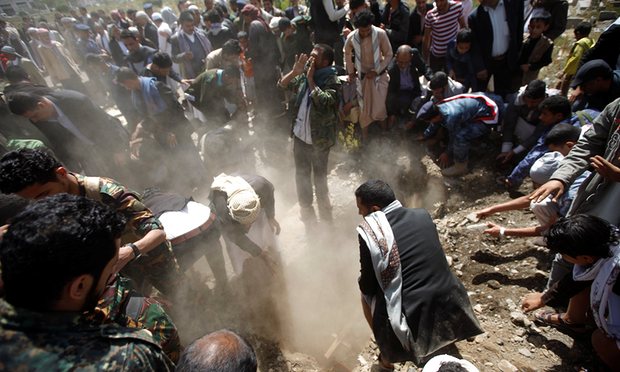 October 28th, about 100 MPs were missing or abstained from vote to withdraw support for Saudi-led coalition, The Guardian reported on 27th October.

“Dozens of Labour MPs are facing a backlash for being absent from their party’s motion to withdraw UK support from Saudi Arabia’s war on Yemen, with Emily Thornberry, the shadow foreign secretary, calling their actions disappointing,” the report said.

Thornberry said the motion would have sent a message to the government that MPs do not want to back the war without an independent UN investigation into whether the Saudi-led coalition is breaking humanitarian law.

About 100 Labour MPs were missing or deliberately abstained from the vote on Wednesday, which failed by 283 votes to 193, although several dozen were given authorized absences by the whips.

In response, Thornberry, who argued for the motion from the Labour frontbench, said she was disappointed with her colleagues for abstaining and disgusted with the Conservatives who voted against withdrawing support from Saudi Arabia.

According to the guardian, she said “Yesterday’s motion gave us the opportunity to send the opposite message to the world … that, while Saudi Arabia will remain a valued strategic, security and economic ally in the years to come, our support for their forces in Yemen must be suspended until the alleged violations of international humanitarian law in that conflict have been fully and independently investigated. And until the children of Yemen have received the humanitarian aid that they so desperately need.”

She added “That would have been the right message to send to the rest of the world. That would have reflected what we should stand for as a country. And that is why I was so disgusted that all but one brave Tory MP voted against sending such a message and disappointed that some of my Labour colleagues abstained from doing so.”

One Labour MP, who is not supportive of the Labour leader, Jeremy Corbyn, but voted for the motion, said he was frustrated and upset that a number of his colleagues were “using the issue as a way of trying to beat Jeremy”.

“It is such as serious issue and it’s obviously going on the Tory side as well, but there is a massive humanitarian disaster here. It should not be an opportunity to score political points,” he said.

It is understood some Labour MPs who opposed the motion were orchestrating deliberate abstentions and in discussions with some Conservatives about the chances of defeating it.

A number of Labour MPs faced criticism on social media for not turning up to the vote, with lists of names circulating despite some having permission not to turn up for family, health or job-related reasons.

It came as ITV News said it had seen evidence that British-made cluster bombs had been used in Yemen attacks and there were pictures in the media of people suffering severe malnutrition.

Corbyn renewed his calls for the government to halt arms sales to Saudi Arabia on Thursday, saying it seems “very disturbing that there appears to be evidence British weaponry has been used in Yemen”.

“We put a motion to the House of Commons demanding a UN investigation into what’s happened in Yemen and I absolutely stand by the resolution we put,” he said. “My own view is that they should suspend supplies until such time as we have had the investigation.”

In the debate, Boris Johnson, the foreign secretary, rejected the suspension of arms sales, saying other western countries would “happily supply arms” to Saudi Arabia without the same protections demanded by Britain.

He added that suspending arms sales would “at a stroke” eliminate Britain’s diplomatic influence in the Yemen conflict, during which the Saudi-led coalition has been accused of war crimes.