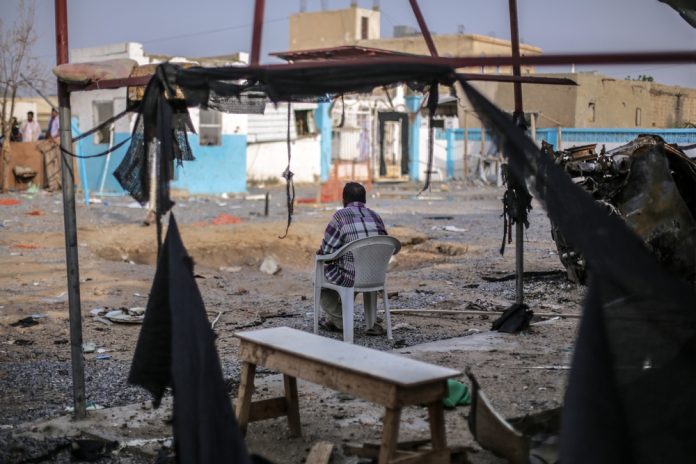 Eighteen months of brutal conflict have plunged Yemen into a full-blown humanitarian emergency. After a short ebb in fighting brought on by recent peace negotiations, airstrikes and ground combat have fully resumed, with dire consequences for civilians. All armed actors involved in the conflict are conducting this war and carrying out indiscriminate attacks without respect for civilians or essential civilian infrastructure like hospitals.

According to Doctors Without Borders/Médecins Sans Frontières (MSF), Health facilities supported by MSF have not been spared. On August 15, an airstrike on the MSF-supported Abs Hospital in Hajjah Governorate resulted in 24 wounded and 19 deaths, including an MSF staff member. The UN reports that over 600 health facilities in the country have stopped functioning due to damage or lack of staff and supplies, jeopardizing access to health care for millions of people.

“The impact of the conflict on people’s physical and mental health cannot be overstated. In addition to tens of thousands of war-related injuries, MSF teams regularly treat large numbers of patients for acute post-violence stress syndrome. Patients report generalized symptoms such as body pain, headaches, and chest pains related to the physical and mental trauma they have endured. According to UNOCHA, nearly three million people were displaced by conflict within the country as of September 2016” the report included.

MSF called in its report  all parties to the conflict to respect international humanitarian law to ensure the protection of civilians and medical structures and personnel, allow the sick and wounded unhindered access to health care, and guaranty the delivery of aid to those in need.

MSF works in 11 hospitals and health centers in Yemen and provides support to 18 hospitals or health centers in Taiz, Aden, Al-Dhale’, Saada, Amran, Hajjah, Ibb, and Sanaa governorates, employing nearly 1,600 staff members, 82 of whom are international staff. From March 2015 to the end of November 2016, 55,127 war-wounded patients were treated in MSF facilities across Yemen, and 27,370 surgeries were performed.

After attacks forced the closure of projects, MSF resumed working in Hajjah and Abs hospitals in November 2016. MSF continues to support hospitals in Sa’ada with supplies of medications and logistical support