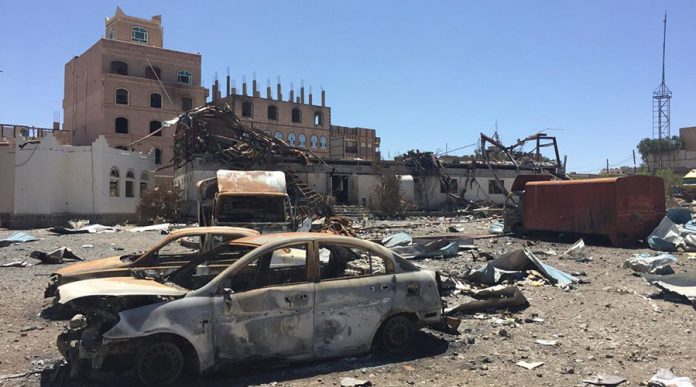 Human Rights Watch slammed the United States’ role in Saudi-led coalition bombing of Yemen, stressing that the coalition has been committing unlawful crimes against Yemeni people.

The HRW’s Researcher said she had visited a site of an attack by Saudi-led coalition in a small Yemeni village.

“I went to the bombing site with friends and family members of the victims. In the wreckage, we found a piece of a US-made munitions with markings indicating it was manufactured by Raytheon in October 2015. It was the first time that the United States had identified the weapons of mass destruction. Attack, the fourth time we identified a weapon made by Raytheon.

Beckerle meanwhile noted that the administration of US President Donald Trump appeared poised to approve the sale of more weapons to Saudi Arabia, including Raytheon-made bombs, to the tune of $ 400 million.

At least 4,773 civilians have been killed and 8,272 wounded since the start of the conflict, the majority by coalality airstrikes, according to the United Nations human rights office. The war has driven Yemen to the humanitarian “brink,” with 7 million people facing starvation and more than two-thirds of the population in need of humanitarian aid.

The researcher said that the US The United States, which became a party to the Yemen conflict during the first months of fighting by providing direct support to the coalition, including refueling planes during bombing raids, has provided substantial assistance to Saudi Arabia, including “intelligence , Airborne fuel tankers and thousands of advanced munitions. ”

“International legal scholars and US lawmakers have warned that continued US support including through weapons sales to Saudi Arabia’s military campaign in Yemen may not only make the US government complicate in coalition violations of the laws of war, but also expose US officials to legal liability for War crimes, “Beckerle said

There is no mystery here: The Saudi-led coalition has committed scores of unlawful attacks, many amounting to war crimes. Continued arms sales not only send a clear message to the coalition that it can kill civilians with impunity, but they are increasingly put US officials at legal risk for assisting those crimes, ” she added