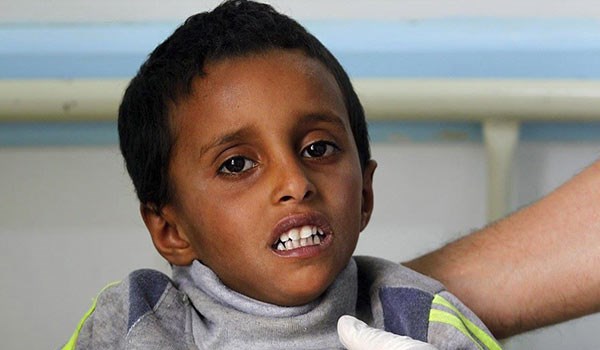 The United Nations said the cholera epidemic in Yemen has become the largest and fastest-spreading outbreak of the disease in modern history as the Western-backed Saudi regime continues daily bombardments of the impoverished country.

The World Health Organization said a million Cholera cases expected in Yemen by the end of the year, with at least 600,000 children likely to be affected, Al Waght reported.

The spread of the outbreak, which has quickly surpassed Haiti as the biggest since modern records began in 1949, has been exacerbated by hunger and malnutrition. While there were 815,000 cases of cholera in Haiti between 2010 and 2017, Yemen has exceeded that number in just six months.

The Saudi-led coalition started a bloody aggression on Yemen in March 2015 to oust the popular Ansarullah and restore to power the fugitive Hadi who resigned as president and fled to Riyadh. The Saudis have failed to achieve their stated objective and are now stuck in the Yemen quagmire while indiscriminately bombarding the impoverished stated on an almost daily basis.

The Saudi-led aggression has crippled the country, causing widespread internal displacement, the collapse of the public health system, and leaving millions on the brink of famine.

It is estimated that 19.3 million Yemenis, more than two-thirds of the population, do not have access to clean water and sanitation.