In a country witnessing the worst humanitarian disaster in the world, neither war nor siege are the only cause of this disaster. Some of the “helping” hands that provided aids share some of the damage imposed on the Yemeni people, which have brought death to thousands.

Almasirah TV in an investigation, of the work done by some International Organizations, highlighted serious acts that have contributed to increasing the suffering of people in dire need of these organizations help. The camera traveled from one health center to another and from one government office to another in search of answers for the deteriorating situation of the health infrastructure. In between, the stories of many patients, victims of the US-Saudi siege and bad healthcare system. 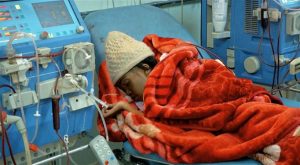 A struggle with death, a Yemeni citizen had to go through along with three of his sons. Hi story started with kidney failure and didn’t stop with a successful kidney transplant for him and two of his sons. A transplant that replaced Renal dialysis sessions with Immunosuppression drugs, that prevent the body defense system from expelling the transplanted kidney, exposed the role of international aid organizations and their reckless treatment of the lives of many Yemeni patients.

“Under lack of resources due to the US-Saudi aggression, the process of distributing free medicines to those who have kidney transplant, by the Ministry of Public Health and Population, had stopped. But this did not prevent some of those patients from going back to the ministry, searching for what delays the inevitable death,” said a patient explaining the critical condition of many Kidney transplant patients.

The humanitarian appeals launched by the Health Ministry continued, but none of the responses have really alleviated the crisis, which has reached its highest levels in 2018. Head of Al-Rahmah Foundation in response to a question of the expected response, of international organization, to the plea of the Health Ministry, said that “the international organizations’ pledges, of providing support, continue, but the response has a limited effect.”

According to Al-Rahmah Foundation for Kidney Transplant Patients Care, this was a blessing, until the lack of drugs started to cause relapse for some patients and took lives of other.” This therapist at Al-Thawra Hospital confirms that several cases who after their kidney transplant have shown deteriorating with having to use medicines that contravenes medical and scientific prescription.

The Ministry of Health Advisor for Nephrology said that “some of the kidney-transplanted patients returned under the pressure of the high cost and the low budget that don’t cover their medicines, while others were so close to take their positions in the long lines of renal failure patients, who couldn’t survive the UN war of therapy.”

The blood pressure connectors provided by the aid organizations caused damage to air passages, through the patient’s vein, blood clots during the dialysis session, doubling salt solution use, which means doubling the session time, the amount of solutions given to the patient was doubled to prevent blood clotting, which caused bleeding for some of them after the session ended and the solutions caused renal dialysis devices to stop before the session ends as well as reducing the dialysis session efficiency. The medical staff was fighting to save patients’ lives from the dialysis supplies threats of being incompatible with the devices.

What made this disaster more staggering was knowing that the organization that provided these supplies was already aware of the type of devices used for dialysis in Yemen, which means they had to provide specific materials according to the manufacturer company instructions. Chief of Staff of Al-Thawra Hospital said that “in the struggle of death & life. It is no longer available for renal failure patients to get half of their needed dialysis sessions at state expense. This was because of the siege as well as the aid organizations.”

This investigation documented that the largest UN health organization has combined between ignoring renal transplantation insurance and providing a drug that was for patients who receives renal replacement therapy as part of the disaster, not part of the relief. The Supreme Commission for Medicines and Medical Supplies, subjected samples of “cyclosporine” medicine to laboratory test, which is one of the Immunosuppressive drugs, and the results confirmed the complaints of those affected.

The head of the Supreme Commission said, in response to what the Ministry of Health has done to deal with the challenge, that “in order to remedy the disaster, Health Ministry has withdrawn the organization’s medicine from its central pharmacy and decided to return it to the organization. In the Ministry we sought to find out the circumstances in which this medicine was placed in the hands of its users before examining its specifications and effectiveness.”

The head of the National Program of Pharmaceutical explained how the World Health Organization (WHO) reacted to the Health Ministry memos about the bad drugs giving to the patients in Yemen, saying that “on paper, the World Health Organization (WHO) expressed interest in the problem. We repeatedly tried to know WHO’s comments and the reasons why they gave the transplanted-kidney patients an unknown and unsafe drug in addition to dialysis supplies and solutions that were nonconforming with the supposed specifications, but none of the organization’s representatives respond.”

According to the Health Ministry, the World Health Organization (WHO) contravenes its own protocols, which require the import of any pharmaceutical product with a number of documents such as a certificate to proof license for the manufacture, marketing and using the drug in the country of origin, along with files of drug safety periodic and the study of bioequivalence.

The Health Ministry Spokesman gave some number of the cases in need of immediate help, “the number of patients with renal failure cases, that reached up to 5832 patients,” he siad. That brings the mortality rate to the quarter, it was accompanied by the siege imposed on the country and also the aid that were supposed to break and reduce the severity of the situation.

Within this investigation, an official document was obtained stating that eight dialysis devices have stopped working in “May-22nd Hospital” dialysis center in Hamdan area in the capital Sana’a, due to using dialysis supply provided by an organization, which were not compatible with the specifications of the Hospital’s equipment. In the words of the “concerned” United Nations, The humanitarian catastrophe in Yemen is (man-made) and in the words of thousands of people who are suffering in Yemen, “who should therefore be concerned about investing the disaster?”

The US-Saudi aggression fires in Yemen haven’t stopped so far, and the attempts to firefighting with tears won’t work. If the so-called “humanitarian organizations” are serious about being a part of the solution, they should just stop providing patients with the disease instead of the cure.