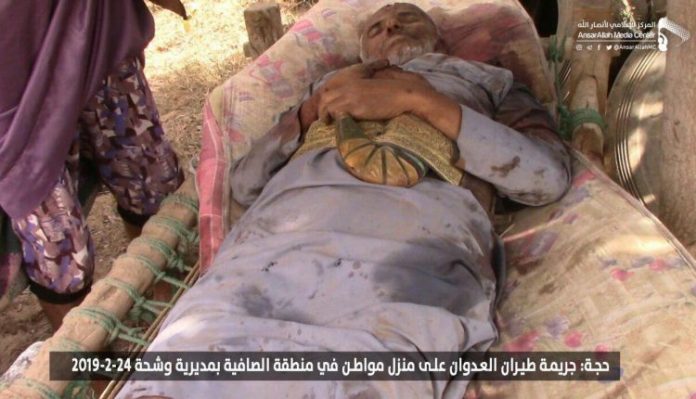 Saudi warplanes launched a series of raids on the provinces of Sa’ada and Hajjah, killing seven citizens and injuring seven others, while mercenaries continued to breach the cease-fire agreement in the province of Hodeidah during the past 24 hours.

A security source told Saba news agency that the warplanes  targeted a car for shoppers returning from the market of Khadlan Mstba district in Hajjah province, which led to the death of four citizens and wounding three others.

The source pointed to the death of a citizen and wounding another in a raid on a house West Bani Hassan in Abs district.

The source said that the  aggression launched a raid on the car of a citizen in the area of ​​Ghafra in the directorate of al-Zaher  in Sa’ada province, killing two citizens and wounding three others.

The warplanes launched ten raids on different areas in the Kattaf district.

In the province of Hodeidah, the invaders and mercenaries targeted with five mortar shells and medium machine guns citizens farms in the city of al-Druhami.

According to the source, the invaders and mercenaries shelled 20 mortar shells in the village of Shaab in the district of Hays, and also shelled more than 50 artillery shells and heavy and medium machine guns Al-Fayza area in the directorate of al-Tahita.

The source pointed out that the mercenaries aggression bombed shells and heavy machine guns towards Al-Dhibiani neighborhood and the Union Hotel and residential neighborhoods in the city of Hodeidah.

The source said that the aggression warplanes and espionage deployed heavily in Zbaid, al-Tahita, Hyss and the city of Druhami.