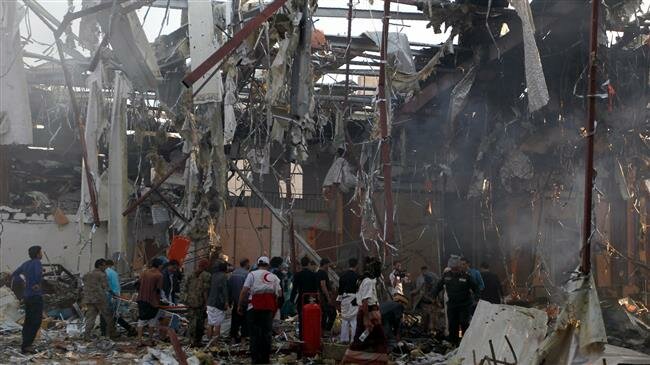 Human rights groups called on Australia to immediately stop selling weapons to Saudi Arabia and the United Arab Emirates, the two Arab countries leading a deadly war against the people of Yemen.

Unlike many western nations, Australia has decided to ignore international outrage over the war in Yemen and maintained its arms deals with both the UAE and Saudi Arabia, the Guardian reported Thursday.

Last week, arms shipments destined for Saudi and UAE forces were photographed as they awaited shipment inside Sydney’s international airport.

Mwatana for Human Rights, a group investigating violations of humanitarian law in Yemen, has accused Australia of encouraging the war and “contributing to the worst humanitarian crisis in the world.”

The organization says Australia should “immediately suspend arms exports” to Riyadh and Abu Dhabi, arguing that distance did not justify Australia abrogating its responsibility towards the Middle East region and the Saudi-led coalition’s crimes.

“The behavior of the coalition in committing violations of [international humanitarian law] and war crimes would not continue if the allies of Saudi Arabia and UAE, including [Australia], took a firm position and suspended the arms sales,” a Mwatana spokesman, Osamah Al-Fakih, told Guardian Australia.

“Instead of fueling the armed conflict with arms, Australia must take positive steps toward accountability for the violations committed by all parties to the conflict and toward justice for all victims of human rights violations in Yemen,” he added.

Many countries, including the UK, Denmark, Finland, Germany and Belgium, have all suspended arms exports either upon court orders or receiving evidence that the weapons were indeed used against civilians in Yemen.

Australia, however, says it has put in place extensive checks to ensure its weapons are not used by Saudi and Emirati militaries in violation of humanitarian law.

Electro Optic Systems, one of the Australian firms exporting military equipment to Saudi Arabia, has tried to justify the arms deals by claiming that it only sells weapons to Saudi’s interior ministry, which operates within Saudi borders.

The company claims none of the remote weapons systems it sells to the Saudis have been used in the Yemen conflict.

This is while, Mwatana has documented Saudi-led attacks that violate international law and “may amount to war crimes.”

The group has also found evidence that weapons made by American and European companies are being used against civilians targets across Yemen.

Saudi Arabia, the UAE and their regional allies began pounding Yemen in March 2015 in a bid to reinstall a former regime and eliminate the Ansarullah, which has been defending the country along with the armed forces.

The US-based Armed Conflict Location and Event Data Project (ACLED), a nonprofit conflict-research organization, estimates that the Saudi-led war has claimed the lives of over 60,000 Yemenis since January 2016.

The years-long military aggression has also taken a heavy toll on Yemen’s infrastructure, destroying hospitals, schools, and factories. The United Nations has already warned that more than 24 million Yemenis are in dire need of humanitarian aid, including 10 million suffering from extreme levels of hunger.