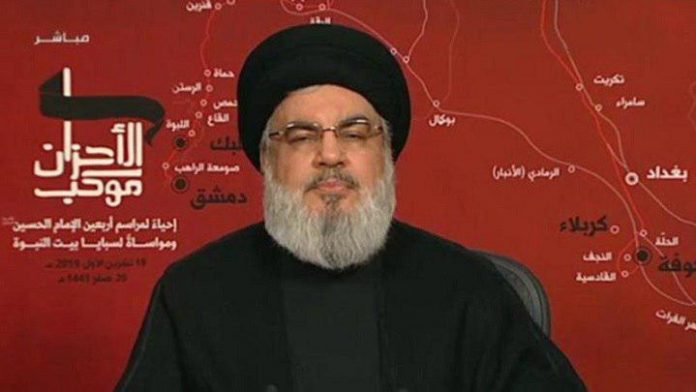 Sayyed Hassan Nasrallah confirmed on Saturday that the current financial crisis is the result of dozens of years, everybody is held responsible.

In a speech on the anniversary of Arbaeen of Imam Hussein, Sayyed Nasrallah said all parties are held responsible before what the country is witnessing.

Sayyed Nasrallah added that it’s shameful that some are shirking responsibility, especially those who partook in all previous cabinets.

Sayyed confirmed that it’s wrong to say that the government has no other choice than imposing taxes. “What happened throughout these couple of days confirms that solving problems through taxes will lead to crises,” he said.

Sayyed Nasrallah described  the current situation saying  “ there are two major dangers; the first is financial and economic collapse, the second is the danger of a popular explosion”. He added,” If we cooperate, gave priority to economic state, we will be able to save our country.”

Explaining the importance of these protests as they were spontaneous and reflect people’s rage, Sayyed Hassan said to protesters “don’t let forces and parties adopt your moves and protests.” “We appreciate your outcry, your powerful message was successfully sent to the government.”