Home Reports A child under 5 dies every 10 minutes in Yemen due to... 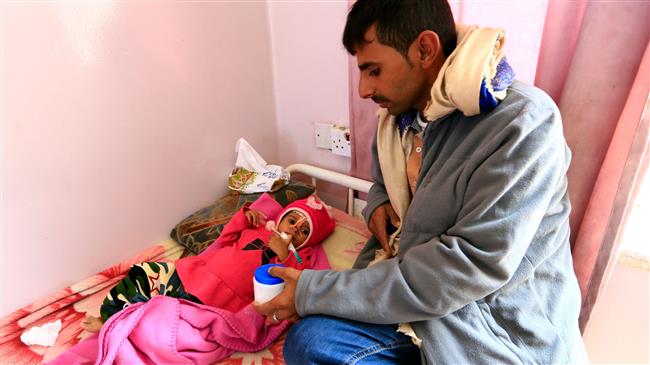 The Yemeni minister of public health and population says it is estimated that every 10 minutes a child under the age of five dies from extreme hunger in the conflict-plagued and impoverished Arab country, warning that the ongoing Saudi-led blockade is also taking a heavy toll on newborn babies.

Speaking at an event held in al-Sabeen Maternal Hospital in the capital Sana’a on Saturday, Taha al-Mutawakel said six newborn babies also lose their lives every two hours as a result of the continued deterioration of the health situation in Yemen, the Arabic-language al-Masirah television network reported.

“We are not demanding toys and video game consoles, but we are calling for incubators and other related devices to give children the right to life,” Mutawakel added.

He then called on the United Nations and humanitarian organizations to clarify the fate of funds allocated for Yemen, and how they have been squandered on cars and services instead of alleviating the sufferings of Yemenis.

“Stop shedding tears for our children who get killed, whilst there is no credibility whatsoever in your international reports and they do not help assuage this tragic situation,” Mutawakel said in address to the United Nations.

He went on to say that 5,000 Yemeni children annually go through traumas caused by blasts of weapon of mass destruction, some of them internationally-banned.