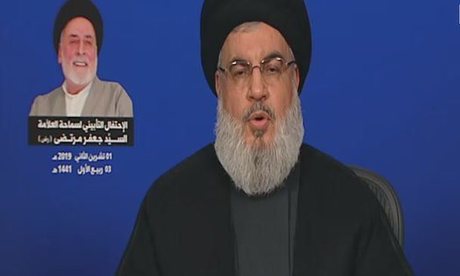 Hezbollah Secretary General Sayyid Hasan Nasrallah has delivered a speech on Friday for the passage of seven days on the departure of Islamic scholar Ayatollah Sayyid Jaafar Mortada.

His eminence divided his speech into two parts. In the first part he talked about Sayyid Mortada, his rich journey, and his great support to the Islamic Resistance. In the second part he tackled the internal Lebanese developments.

After indicating that the incidents in the past two weeks “had helped us understand history and how it was written more, due to all the falsification of words by media,” his eminence assured that the positives of the protests must be highlighted.

“When I told protesters that your calls are right and you should be careful not to let anyone take advantage of your move, and that it’s your right to know the funder if there was one, just a few minutes later many reporters told people that I had said that you are agents of [foreign] embassies and that they are funding you, knowing that I didn’t say any of that,” he said.

On another hand, Sayyid Nasrallah saluted the patience and awareness that protesters had, which helped stop any form of chaos and internal fighting, knowing that some sides were pushing towards that.

“Elements leading to chaos were present, first the unprecedented form and amount of cursing which I assure to you is not at all spontaneous, even more, broadcasting these curses and humiliations on media is totally denounced,” he added, stressing that “This cursing was an attempt to trigger the emotions of the opposite street in order to cause trouble and clashes in the country.”

“Everyone has weapons in Lebanon, not just the Resistance, and everyone has emotions and could be triggered by these bad word. Moreover, closing the streets, humiliating people who wanted to pass, taking ID cards, offending reporters, and speaking about an imprecise number of one million and two million being in the streets, knowing that they were a maximum of one, two, or three hundred thousand, while the millions were in their homes and their roads were cut, all these were elements of chaos,” Sayyed Nasrallah explained.

As he reassured that “media must not broadcast cursing under the claim that this is the voice of people. Curses are never the voice of people,” his eminence noted that “chaos was prevented by the consciousness and awareness that many Lebanese had, even if there were small incidents here and there.”

Sayyid Nasrallah stressed peoples’ right to protest without the use of cursing others, as he called on people to have patience and consciousness in order to obstruct the conspirators’ attempt to ignite internal fights that do not serve the country.

Sayyed Nasrallah assured that “all our efforts were to avoid a vacuum, so that the country’s institutions would continue to work. We took different stances on one hand to understand the righteous and honest calls of people suffering from the corruption in the country, and on the other hand to be aware of the dangerous state that the country will fall into in case of vacuum.”

“We had to act responsibly, and this is what happened. We did not raise any slogan nor take any part, we only held the responsibility to prevent the destruction of the country,” he added.

“Hezbollah was never in control of any government that passed. This [claim] is only an attempt to hold Hezbollah responsible for the corruptions in the country. Even when we say that we don’t support the fall of any government, this is for the sake of the country, not for Hezbollah,” he added, asserting that “for the past couple of years we had never been worried about Hezbollah because we are very very strong unlike any time that had passed, and Hezbollah had not used any of its powerful files yet. We are only worried about our country and people, and I assure to you that if the country fell into chaos and it couldn’t pay salaries, we would still be able to continue.”

Concerning Saad Hariri’s resignation, Sayyid Nasrallah said that the party does not support this step, considering that “the positive shock should have been that the government gathers and put laws to fight corruption and that protesters stay in the streets to put pressure on it.”

“Now the Prime Minister resigned, this means that the whole government fell, so there is no chance to implement any form of reformations or have an economic hope for the time being, we just have to wait. We did not support the resignation of Saad Hariri. It was his choice and he had his own reasons, now it is the responsibility of the Lebanese to push for the formation of a new government in the shortest time.”