Home Reports Letter to French government: Stop the war and the massacre of civilians... 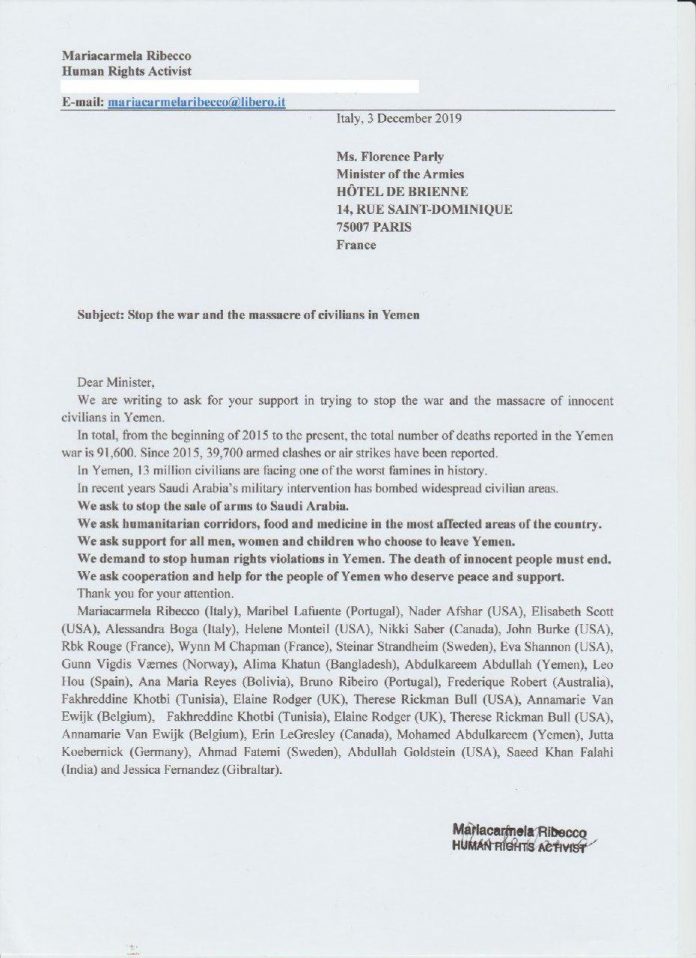 On December 3, a group of human right activists from different nationalities have sent a letter to the French Minister of the Armies, Florence Parley, titled “Stop the war and the massacre of civilians in Yemen.”

According to the letter obtained by Uprising Today, in total from the beginning of 2015 to the present, the total number of deaths reported in Yemen war is 91,600.

The letter confirmed that 13 million civilians are facing one of the worst famines in history, stressing that in recent years, Saudi-led coalition has bombed widespread civilian areas.

“We want to stop the sale of weapons and ask European countries to help the Yemeni people with humanitarian corridors and asylum rights for those who choose to leave Yemen, ” Mariacarmela Ribecco, one of the humanitarian activists said.

She added: “our requests are listed in the letter. We support the weakest and most suffering of the Yemeni population”.

In the letter, the activists listed their demands. These demands are topped by the stopping of arm sales to Saudi Arabia, which is leading the coalition war against Yemen since 2015.

They also asked for humanitarian corridors for food and medicine in the most affected areas in the country.

The activates voiced their support for all men, women and children who choose to leave the country by granting asylum rights.

They further called for a total stop of human right violations in Yemen, stressing that “the death of innocent people must end.”
The activists ask for cooperation and help for the people of Yemen, stating that they deserve peace and support.