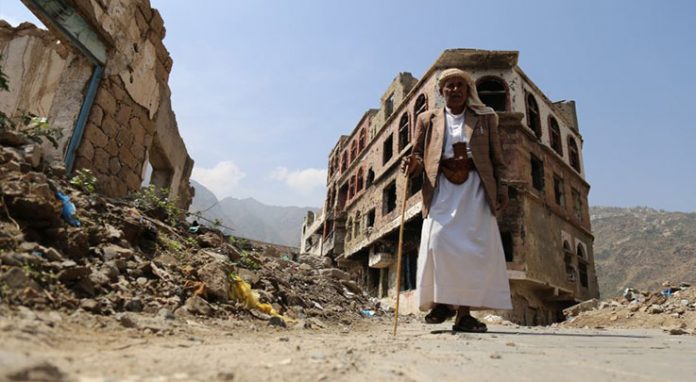 Yemeni Armed Forces spokesman stated that the Yemeni forces carried out a new military operation “If you return, we will return”, with nine ballistic missiles and more than 20 guided drones, targeting US-Saudi camps in Mocha,  in response to the violations of the coalition of aggression and its mercenaries in the West Coast.

Yahya Sare’e said that more than 350 were killed and injured, including Saudis, Emiratis and Sudaneses in the operation. The operation led to destroying five weapons storage, many vehicles and armored vehicles inside the targeted camps. It disabled and destroyed several radars, in addition to Patriot batteries.

Sana’a’s message, which passed the warning stage, crossed the red lines of the aggression coalition and recalled the achievements of the Yemeni forces in Victory from Allah Op, which has become a truing point for the confilect. The difference between the two heroic operations is that the targeting in the latter achieved new goals that the coalition of aggression will receive the message in full. The message, according to the Yemeni armed forces, is that Sana’a will not stand idly by and will continue to react forcefully to violations of aggression in Hodeida and the West Coast.

In a new reading, Human Eye Center for Rights and Development (CEHURD), an independent civil society organization that publishes periodic reports on civilian casualties and civilian infrastructure, issued a statistical report on the scale of civilian casualties suffered in Yemen for nearly five years by US-Saudi aggression.

The Center confirmed that 42,135 civilians were killed and wounded as a result of the direct shelling of the aggression coalition, especially the airstrikes that exceeded half a million raids and 2689 women.

According to the report, killing and injuring children by direct shelling accounted for more than 25% of the total number of civilian victims.

As for the losses in the economic establishments, the report shows that the aggression has placed this sector on its list of objectives to achieve the siege goals in a short time.

The United Nations organizations said in previous statements to their officials in Sanaa that the Yemeni tragedy as a result of the aggression and siege has not yet revealed all its ugly face, and  stop the aggression means the beginning of the process of discovering the true picture of the human tragedy in the world’s largest and recent human history.

Many years will be needed in Yemen to get rid of what happened as a direct and indirect result of tons of weapons over five years, the siege and the spread of epidemics, and each will affect the impact of future generations.

In March 2015, former Saudi Foreign Minister Adel al-Jubeir announced from the White House courtyard after meeting with pro-US President Barack Obama the launch of military operations against Yemen, and the formation of a coalition of aggression from several countries with the support of Washington aimed at ending the nascent popular revolution in Yemen after Just 6 months on.