Home Local News Child killed and his brother wounded in blast of remnants of aggression... 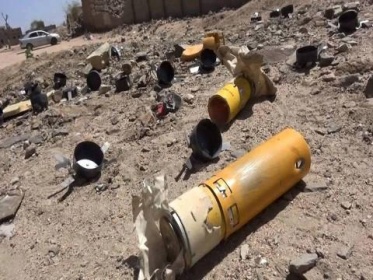 At least one chiled was killed and another one critically wounded when Saudi-led aggression coalition’s cluster bomb remnants exploded in al-Zubairat area of the Kataf district of Saada governorate, a security official said on Saturday.

According to Health sources in Saada told “Yemen Press Agency” that the child, Abdulsalam al-A’adar, was tending sheep with his brother Mohammed, before the remnants of a cluster bomb exploded near to them.

The blast left the child, Abdulslam, fatally wounded, who died immediately after the explosion, while his brother Mohammed remains in critical condition.

This comes at a time the Saudi-led coalition forces continue to attack civilians in Hodeidah province in flagrant violation of the Swedish agreement.

According to local sources in Hodeidah, the al-Udian junction in Hays district was hit by more than 30 artillery shells by coalition forces, resulting in heavy losses of citizens’ property.