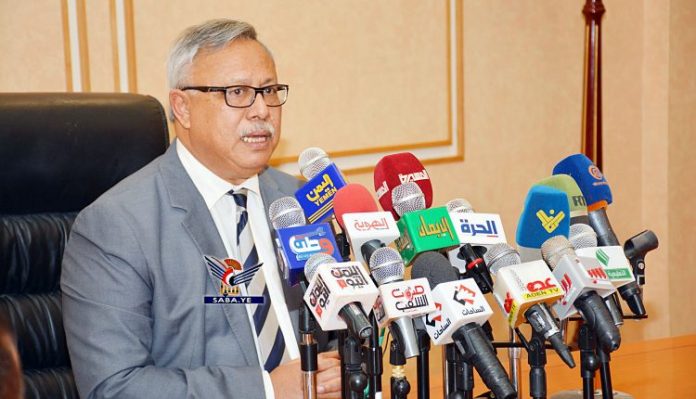 The National Salvation Government on Sunday announced, in a press conference held in the capital Sanaa, about new 21 precautionary decisions to confront Corona virus epidemic.

At the conference, Prime Minister Dr. Abdulaziz bin Habtoor stressed that citizen bears a great responsibility in making the precautionary decisions successful in confronting any emergency related to the Corona virus.

Dr. bin Habtoor warned citizens from passive dealing or continued indifference to the governmental decisions and actions announced during this conference or the previous decisions taken by the Cabinet last week.

“Citizen should be aware of the seriousness of this virus and to adhere to the announced initiatives and measures and be aware of his responsibility towards himself and the health and safety of his family and society,” he said.

The Prime Minister indicated that the health capabilities and equipment of the health sector in Yemen after five years of the siege and aggression are in “an unenviable situation”, which requires everyone to strictly abide by precautionary decisions and measures until this epidemic subsides.

During the conference, Minister of Public Health and Population Dr. Taha al-Mutawakkil announced the new precautionary government decisions as follows:

1- To reduce the number of employees in the public, private and mixed sectors by 80 per cent, with the exception of health, interior and defense.
2- The work of public and private hospitals is limited to receiving emergency cases and emergency operations.

3- All ministries and state institutions, private and mixed sectors should prepare an emergency plan and crisis management to face the Corona virus.

4- The Ministries of Interior and Defense and Security and Intelligence Agency, and the Local Authority shall prepare a plan to implement the geographical quarantine of any street, area, neighborhood, city, district, or province in accordance with what the Minister of Public Health decides when registering any confirmed cases, and the Ministry of Industry and Trade should prepare a plan to provide catering to the area under the quarantine.

5- The Ministry of Interior should prepare a plan to confront Corona in prisons and reformatories.

6- Calling citizens to reduce movement between provinces, districts and cities, except for necessity only.

7- Qat markets are temporarily moved to open places to prevent crowding in the capital Sanaa and the provinces, and in the absence of commitment to this, the Qat markets are closed.

8- Paying attention to the cleanliness of public baths, providing disinfectants and sterilizers, and tightening control over them.

9- Shops, restaurants, buffets, and hotels are required to provide sterilizers and disinfectants to customers, and the responsible authorities in the capital and provinces should follow up on this.

10- Shaving shops are obligated not to allow more than three customers to be present in them, with providing disinfection tools and obliging the hairdressers to wear gags, cover, and gloves while shaving and sterilizing the shaving tools.
11- Closing hairdresser and beauty shops until further notice.
12- Banks, exchange shops and companies are obligated to provide the necessary sterilizers and disinfectants to customers, with a guard assigned to an ATM machine, to sterilize the hands of ATM users before and after using them.

13- Visits to patients are generally prohibited in all public and private hospitals and restricted to first-degree relatives.

14- Prison visits and reformatories are prohibited and restricted to first-degree relatives.

15- Advancing the date of the judicial leave, and limiting it to shifts.

16- Regulating all markets, malls, stores and shops to reduce congestion.

17- The Ministry of Public Works, and the local authorities in the capital Sanaa, and the provinces should spray sterilizers and disinfectants at the entrances to cities and lanes.

18- Obliging owners of small, medium and large buses to provide sterilizers and disinfectants to all passengers.

19- These decisions are revised two weeks after their date.

20- Announcing educational and media mobilization to confront the epidemic, and for that plans should be made by Ministries of Information and Endowments to raise awareness through the media and social media, not through pamphlets and papers.