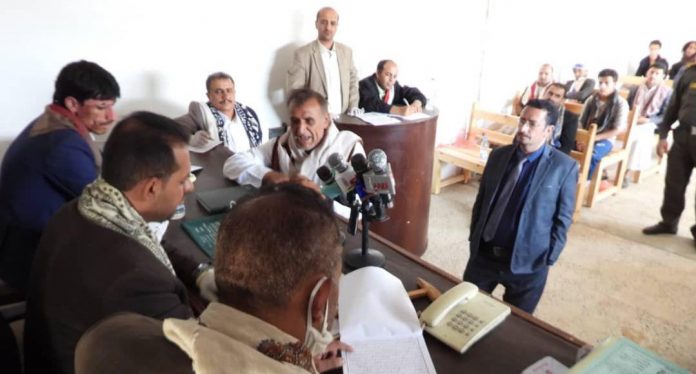 The Criminal Court in Saada province, in its hearing on Sunday headed by Judge Riyadh al-Rozami, listened to the prosecution witnesses for the crime of targeting students’ bus in Dhahian area by Saudi-led aggression coalition.

In the hearing, the chief prosecutor Judge Ibrahim Jahez requested that the case be reserved for judgment, after the prosecution had completed providing evidence that the 61 accused of murdering 42 people and wounding 70 others, most of them children.

However, the court decided to enable lawyers of the accused to respond to the evidence at the next week’s session.

The criminal prosecution had presented the leaders of the aggression coalition on Yemen – the first of them Donald Trump and the last of them Hamid Mujali – led by Saudi Arabia and the countries that support it, namely America, Britain, Israel, as perpetrators of war crime and genocide against students and children of Dhahian.

On August 9, 2018, the aggression coalition aircraft targeted a bus carrying students in Dhahian market with a smart bomb of “mk82” type manufactured by the American General Dynamics Corporation belonging to US Air Force.