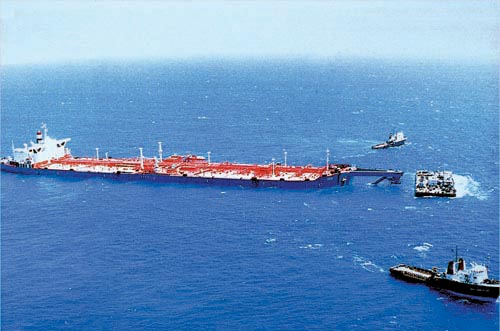 Fish Wealth Minister Muhammad Al-Zubayri described the British move in the UN Security Council and its invitation to a meeting on Safer floating oil tank as a political move, indifferent of the danger it poses to the Yemeni marine environment.

“The issue of the Safer tanker is being raised for the first time in 5 years. Where were Britain and the Security Council when we were presenting the initiatives one after another in this regard without any response?” Al-Zubayri  said Saturday.

He explained that the Supreme Political Council presented an initiative by selling the oil in the tank and dividing its revenues between Aden and Sana’a to pay the salaries of the employees.

He pointed out that there are approximately 121 islands and 650 species of fish in the vicinity of the Safer floating oil tank, therefore its explosion will lead to the elimination of these rare types of fish.

Al-Zubayri stressed that the environmental impacts of damage in the tanker will affect hundreds of thousands of families who live on fishing, as well as many countries located on the coasts of the Red Sea and Gulf of Aden.

The coalition of aggression is refusing the entry of the technical team entrusted with maintenance work, according to the United Nations, to carry out the maintenance of the tanker, Safer,  which has been floating near the port city of Hodeidah since 1989 following. It is at risk of exploding and causing a massive environmental disaster.

Safer, once Yemen’s main oil export facility, is a floating storage and offloading vessel moored about 50 kilometres north-west of Yemen’s port city of Hodeidah, the entry point for most of the  country’s humanitarian aid and imports. It contains more than 147 million barrels of crude oil and has had no maintenance for nearly five years, allowing explosive gases to build up in its storage tanks.

Safer found itself with its large crew in a state of siege within the massive siege imposed on Yemen, which caused the suspension of its activity and then prevented the supply of the necessary fuel for its operation.