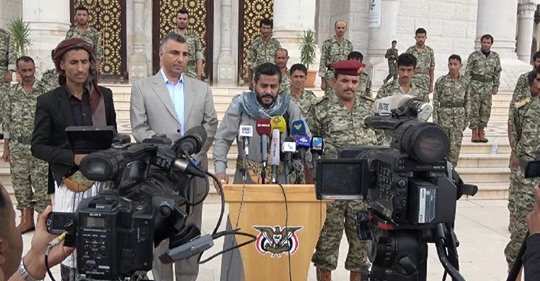 Deputy speaker of the Shura Council,, Mohammed Nasser Al-Bukhiti has confirmed that a full battalion with its leaders who defected from the ranks of Saudi-led aggression  forces announced that it joined the Yemeni army and the people’s committees in Sana’a.”

Mohammad al-Bukhiti, praised praised the national positions and great role made by the leaders of the General People’s Congress (GPC) in coordinating the return of dozens of people deceived by the Saudi-led aggression coalition to the homeland.

The move came during his reception the commander of Engineering Battalion, of the so-called brigades of the Republic’s guards on the West Coast, Major Fawaz Al-Qalai, who defected from the coalition forces led by Tariq Afash.

Al-Bukhiti affirmed that there are many returnees to the homeland being prepared to go to the battle fronts to confront the aggression and its plots that target the Yemeni people and its sovereignty.

Meanwhile, a member of the General Secretariat of the GPC, Tariq al-Shami, called the deceived people being jointed in the ranks of the aggression to return to defend Yemen and its sovereignty, stressing that the leaders of the GPC stood together in facing the aggression.