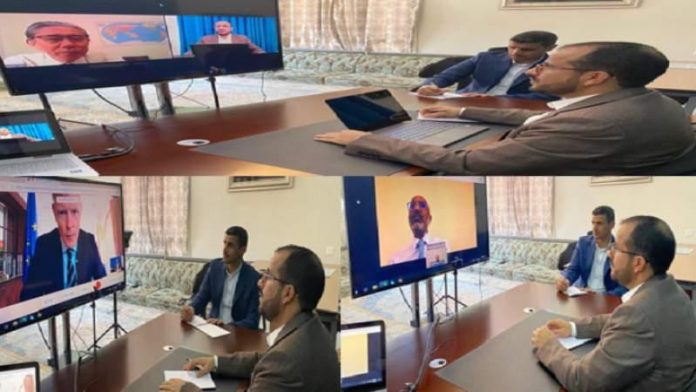 Head of the national negotiating delegation Mohammed Abdulsalam has on Friday held a series of meetings with ambassadors of the European Union, the Kingdom of the Netherlands and the People’s Republic of China to Yemen.

During the meeting with EU Ambassador to Yemen Hans Grundberg, Mohammed Abdulsalam discussed the joint declaration, the humanitarian situation, the exchange of prisoners, the Safer oil Tanker and the military escalation.

“We have confirmed to him our full position for all the necessary details,” he said, stressing that those who stand in the way of peace in Yemen are the Saudi-led aggression’s countries, which insist on the continuation of the blockade and aggression.

The head of the national delegation further stressed that the humanitarian crisis is only one of the results of the unjust blockade and its disastrous effects on the general population of Yemen.

In his meeting with Ambassador of the Kingdom of the Netherlands to Yemen, they discussed the aspects of human rights, especially since the Netherlands is following up on the Yemeni file at the Human Rights Council.

Abdulsalam confirmed that crimes and massacres committed against Yemeni civilians by Saudi-led aggression are the most heinous crimes in modern time, recalling the anniversary of the Grand Hall massacre that took place in 2016.

During his meeting with the Chinese ambassador to Yemen, the head of the national delegation discussed the political, security and humanitarian situation in Yemen, as well as regional and international challenges related to bilateral relations between the Yemeni people and their friends the Chinese people through history.

He confirmed that, after the military failure of Saudi-led aggression forces, the invaders sought to starve Yemeni people through imposing more economic obstacles with a collective punishment that affected all Yemenis.