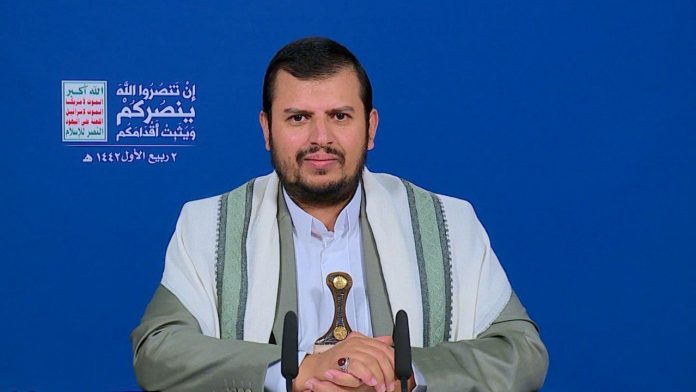 The Leader of the Revolution, Sayyid Abdul-Malik Badreddin Al-Houthi, has called on the Yemeni people to interact greatly in commemorating the birth of the Prophet Muhammad (peace be upon him), through attending all the events to be held on this occasion.

The move came during his speech he delivered this afternoon on the occasion of preparing for the celebration of the Prophet’s birthday anniversary.

“We are opening today the events and preparations for the anniversary of the Prophet’s birth, as a major educational and tactical station that has an impact on the realities of our lives to address all the challenges that we face,” said Sayyid al-Houthi.

He pointed out that the Yemeni people, by virtue of their faith, give special attention to the memory of the Prophet’s birth, stressing that the situation of distortion and deviation has created a large gap among Muslims and led to major problems in their reality.

The Sayyid explained that the enemies have exploited the deviations that exist in the nation, in order to offend Islam and the Qur’an.

He noted that Western civilisation has “no atom of mercy, it tramples on human societies, confiscates the freedoms of peoples, plunders their wealth, occupies their countries, and then comes to talk about human rights.”

He stated that Trump’s boasts of his willingness to give the Zionist entity any Arab land and confiscate it as it did in the Syrian Golan show that the US is not civilised.

“In the West, they prepare for vice and corruption that come with the title of freedom to offend the Great Prophet and Islam,” he said.

The Leader of the Revolution also spoke on matters regarding the West.

“It is forbidden in France to criticise Zionist Jews and to question the Holocaust,” he said, calling doubt on the French claim that everything is open for mockery.

He condemned the fact that France and the Western countries insult Islam and the Messenger Mohammed (peace be upon him) at a time when they woo the Zionist Jews and prevent any offense to them.

Addressing France and its President, Sayyid al-Houthi said, “The eternal stigma that will persist in your reality is what you did during your colonisation of Algeria and your continued justification for those terrible crimes.”

The Leader affirmed that there is an outright, clear and insulting attack on the Messenger, Islam and Muslims, targeting the ideology and faith of the Ummah with the aim of cultural control over Muslims.

He noted that among the causes of the crises suffered by the Muslims is what Western colonialism did, like what France did in Algeria.

“One of the most important causes of human suffering is what the arrogant countries practice in the West, led by the US and its tail Israel,” he added.

Sayyid Abdul-Malik al-Houthi affirmed that the “takfiris [religious extremists] are supported by the US, France and Western countries in order to strike against Muslims.”

He referred to the fact that the United States of America and its allies have intervened to support the takfiris in Syria, Yemen and other countries, because they benefit from them in distorting the image of Islam.