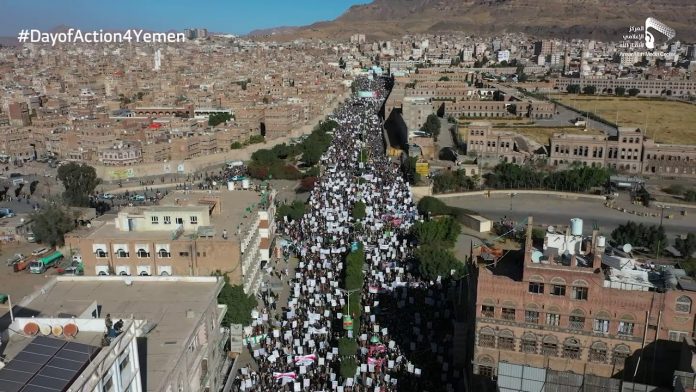 The capital Sana’a witnessed on Monday afternoon a mass rally to denounce the continuation of the American aggression, siege and terrorism, under the slogan “the American blockade and aggression are terrorist crimes.”

During the rally, the participants raised banners in Arabic and English, confirming the Yemeni people’s rejection of the crimes and arrogance of America against free peoples opposing the American and Zionist project in the region.

The participants chanted angry slogans denouncing the US terrorism, aggression and siege on Yemenis for six years, in light of a shameful silence by the United Nations and international community.

A statement, issued at the rally, confirmed that the brutal aggression and the unjust siege on the Yemeni people is primarily American, as the aggression was announced from Washington on March 26, 2015.

The statement indicated that America is committing genocide against the Yemeni people and killing children and women in markets, weddings and mourning halls with American bombs and weapons, and it is the one who provides support and political cover for this aggression to continue.

“This silly designation issued by the Trump administration will not prevent the Yemeni people from continuing their sacred national battle and their jihadist duty to defeat the aggression coalition and its mercenaries,” the statement stressed.

The statement considered the real terrorism is the military, logistical and political support that America is providing to the aggression countries coalition and the tightening of the economic blockade on the Yemeni people.

The statement affirmed that the era of foreign colonial tutelage over Yemen has passed, praising the great sacrifices of the heroes of the army and the popular committees in the face of aggression and siege.