Home Reports YPC: Fines due to detention of oil vessels by coalition exceed $... 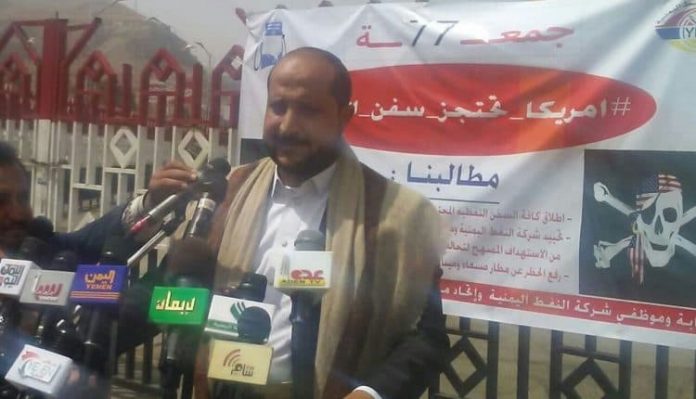 The direct and indirect losses due to the detention of fuel vessels exceeded the 20 billion dollars incurred by the Yemeni people in additional fines,” YPC’s Executive Director Ammar Al-Adhrai said in a statement to media.

The move came during a protest in front of the UN headquarters in the capital Sana’a,  organized by the YPC entitled “USA detains Oil Ships” .

Ammar Al-Adhrai condemned the UN envoy to Yemen, Martin Griffiths briefing of to the Security Council yesterday, in which he said that the average detention of oil ships is seventy-five days, and these ships are waiting to get permits from of the so-called Hadi government.

He noted that the period of detention of these ships amounted to more than 300 days.

Al-Adhrai pointed out that tax and customs duty which made in the report of Griffiths in his briefing would not exceed 6 billion YR, while the demurrage charges of oil tankers is three times more.

He blamed the United Nations and the Saudi-led aggression countries backed by the US for the humanitarian disaster that might happen to the Yemeni people because of the continued detention of fuel vessels.

He called on all free people in the world, all jurists, all activists and media to stand with the Yemeni people and expose the coalition countries, led by the US,  which is exercise piracy against fuel ships that caused further suffering for 26 million Yemenis.

Al-Adhrai noted that all service sectors are threatened with suspension in the coming days due to the lack of fuel and the continued detention of fuel vessels.