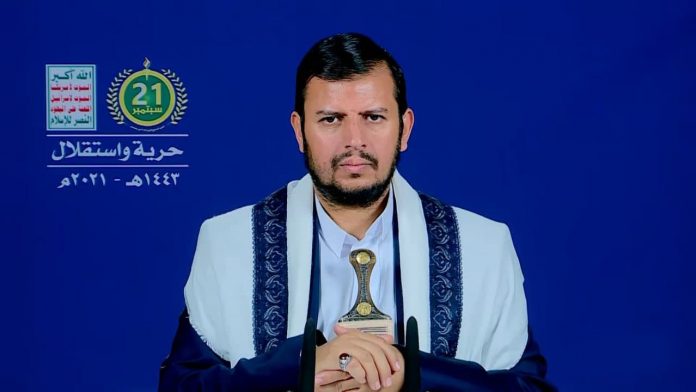 Leader of the Revolution, Sayyid Abdul-Malik al-Houthi revealed important facts about the Arab and international countries being ignorant about the September 21 Revolution in Yemen.

In his speech, made this afternoon on the occasion of the 7th anniversary of the September 21 Revolution, Sayyid Abdul-Malik al-Houthi said that “The Yemeni people were clear in their revolutionary goals, and were not aggressive towards other Arab and Islamic countries, especially the neighbouring countries. Yemeni people sought fraternal relations based on mutual respect and legitimate interests”.

“The September 21 Revolution did not represent a threat to Europe or others in the world, and our decisive stance is against the Israeli enemy and American hegemony”, he added.

Sayyid al-Houthi declared that “The revolution is present for relations based on legitimate interests, not on squandering the wealth of our country at the expense of our people”, confirming that September 21 revolution adhered to freedom and independence. The Sayyid renewed the principled attitude of the Yemeni people towards the Israeli enemy and to defending the nation’s causes.

He pointed out that “the September 21 Revolution clings to freedom, and cannot return from here. The puppets were quick to hand over the country’s wealth to foreigners in exchange for their interests, and there are documents of officials involved in unfair deals against Yemeni people.”

Sayyid Abdul-Malik al-Houthi reviewed the situation in Yemen before the September 21 Revolution.

He stressed that the revolution came from the reality of necessity and human and moral need, and represents great achievements in regard to the present and future of Yemeni people.

The Leader of the Revolution said, “The previous situation of our country before the revolution was the stage of external guardianship, in which the political forces abandoned in the independence and the spirit of our people.”

He stated that “the ruling forces in the country before the revolution colluded with the Security Council’s decision to put Yemen under Chapter VII, while the country’s decision was in the American ambassador’s hands.”

“The situation before the revolution tended to collapse in all areas. The political crisis and collapsed economic situation was getting more complicated, despite of the great support provided by the international community to the former regime,” he added.

The Sayyid went on to say, “The security situation before the revolution was experiencing the reality of collapse through bombings, assassinations and the spread of takfiri elements, and the media and cultural situation was heading in a direction that helps dismantle the social fabric and exacerbate crises.”

He referred to enemies of Yemen as having “robbed our people of all material and moral power (…), and worked to dismantle the army and strip it of the means of force through the restructuring project with the complicity of traitors,” adding that “the bankruptcy of the political forces before the Revolution encouraged the targeting of Yemen in all fields.”

He continued, “Had it not been for the revolution, the American bases in Yemen would have expanded through allegations of fighting al-Qaeda,” adding that “the enemies worked to stir up sectarian and regional strife and political conflicts within the project to dismantle the country.”

Sayyid al-Houthi affirmed that “Washington worked to confiscate Yemeni decision-making power through its ambassadors, in order to achieve its illegal ambitions.”

Furthermore, Sayyid Abdul-Malik al-Houthi confirmed the continuation of the path of confronting the aggression in a revolutionary spirit, until the achievement of complete independence.

Additionally, the Leader of the Revolution emphasised that he valued “the prominent and honourable role of the tribes of Yemen, which were the mainstay of the September 21 Revolution, with their values, loftiness, and moral balance.”

In his speech, he affirmed that “the Yemeni tribes presented in this revolution are the finest picture at a time when the enemies worked to distort it.”

“The goals of the September 21 Revolution expressed all of the people who moved from all their regions, components, and sects based on their human feelings and faith identity,” he said.

Sayyid Abdul-Malik al-Houthi described the September 21 Revolution as “the greatest revolution, as it is free of impurities, exclusion, settling of accounts or crimes.”

He pointed out that the September 21 Revolution “provided an opportunity for everyone through the title of peace and partnership,” stressing that “it is protected by principles, morals, free conscience, and a high sense of responsibility.”

“The September 21 Revolution surprised the enemy, and they were similarly surprised by the steadfastness of our people in the face of aggression and siege,” he said.

Leader of the Revolution Sayyid Abdul-Malik al-Houthi concluded by praising the patience of the Yemeni people, which he described as “the patience of a free people.”