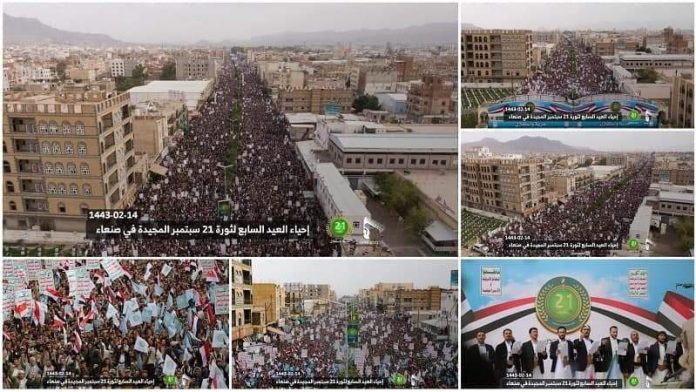 Tens of thousands of Yemenis in the capital Sana’a have on Tuesday staged mass rallies to mark the 7th anniversary of the September 21 Revolution of 2014.

They emphasized moving forward to achieve the full goals of the September 21 Revolution, achieving independence, liberating every inch of the homeland from the impurity of the invaders and occupiers.

The rally’s statement affirmed that the legendary steadfastness all these years in the face of the US-Saudi aggression is one of the manifestations of the September 21 Revolution, that it is a revolution against tutelage.

It pointed out that what the September 21 Revolution called for is dignity and sovereignty, which is a right and legitimate demand for all the peoples of the world.

The rally’s statement explained that the country’s previous foreign tutelage and a government subject to foreign domination completely contradicts the history of Yemen, the culture and the identity of the Yemeni people.

It confirmed that the September 21 Revolution had thwarted the conspiracy to divide Yemen through resistance to foreign aggression and hegemony.

“September 21 revolution, which served as a motivator for the Yemeni people to oppose the aggression, is an authentic Yemeni movement funded by the Yemeni people and not by any foreign country,” the statement said.

The statement stressed that: “The September 21 Revolution is looking forward to national independence with an awareness of the nation’s issues, at the forefront of which is Palestine, which represents the core of the raging conflict in the region.”

The statement concluded by emphasizing that this revolution was found to remain, continue and intensify, and no aggression in the world will be able to undermine it, no matter how powerful and tyrannical it is.