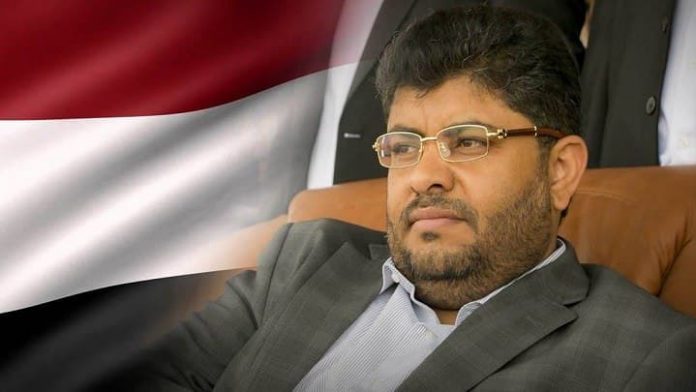 Top member in the Supreme Political Council, Mohammed Ali al-Houthi, revealed that the people of Marib governorate have become very vigilant and ready to take actions that would defeat the invaders and their mercenaries (Al-Qaeda and ISIS) from the governorate.

Al-Houthi said in an interview with Russia Today: The people of Marib realized that their governorate was the starting point for many actions against the Yemeni people.

“Do not bet on them, for they are doomed to failure,” al-Houthi speaking to those who are still betting on the countries of aggression.

He added that the vision of the Republic of Yemen is a vision for all people, the vision of the House of Representatives that is located inside Sana’a, the Shura Council vision and the one government, and whoever follows our movement from the beginning knows that we believe in partnership with everyone and we do not exclude anyone.

He pointed out that “Ansarullah” does not have any special view or orientation, or arrogance over others, adding “We are Yemeni civilians, we have what they have in terms of rights and duties.”

He explained that those who went to Riyadh ruled Yemen during the last period, and the result of their rule was what is happening today in terms of the aggression on Yemen, the killing, displacement and cooperation with other countries to kill and attack the Yemeni people.

Al-Houthi indicated that Sanaa’s political orientation is clear, based on equality with other countries, the preservation of sovereignty and independence, and not being aggressive against others, stressing the unwillingness to attack neither Yemen’s neighbors nor any other country.

” You are killing us for the Israelis to rest, for the Americans and the British to praise you, and for you to move the arms factories in Europe and America,” al-Houthi said pointing his words to the Saudi kingdom.

Al-Houthi posed a question to the leaders of the Saudi regime, saying: If you only want to kill us, why are you besieging the entire Yemeni people even though the ships loaded with goods come from the Gulf from Dubai and Jeddah?!

Regarding the coalition’s propaganda about training the army and popular committees inside Lebanon, Mohammed al-Houthi sarcastically said: “If there was any training for the Houthis inside Lebanon, they would have monitored the largest media in Lebanon and would have announced to the public.”

“It has become apparent to the whole world that all the justifications for targeting our country were untrue, and that the aim was to target the Yemeni people for their security, economy and basics of life,” he stresses.

Al-Houthi revealed a message sent by the UAE to Britain calling for its help in separating the north from the south, but the declared positions, whether in the Security Council or by Britain and the rest of the actors in the international community, call for the unity of the Yemeni people.

He called on the UAE to return to its senses and to abandon the reckless behavior it is working on, whether with regard to Yemen, the Palestinian cause, or the issues of the Arab world, pointing out that the Emirati interventions in the affairs of others are evidence of foolishness and lack of clarity in vision, saying that the Emiratis will not remain at this crude level of blatant interference in the affairs of others and then have no consequences.

On the unjust siege imposed on the Yemeni people, Mohammed Ali al-Houthi explained that the Yemeni people are besieged and patients are prevented from traveling abroad for treatment and are deprived of benefiting from their oil wealth, while ships remain seized in the Red Sea for nine months by the aggressive Saudi-led coalition.

He blamed the countries of aggression and the Security Council, which gave them the green light to continue their siege and aggression.