Mohammed Ali al-Houthi, member of the Supreme Political Council in Sana’a, has announced the unveiling of a new armoured vehicle that has just been joined to the country’s military industry.

According to the Yemeni Ministry of Defence in Sana’a, the vehicles were entirely produced by the country’s domestic interview. 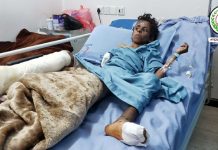