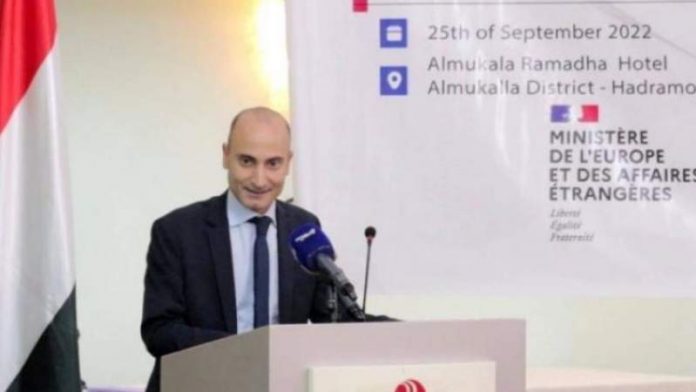 Yemeni Ministry of Foreign Affairs called on France to review its position towards Yemen and present its diplomacy in a better way.

In a tweet, Deputy Foreign Minister, Hussein Al-Ezzi, said, “The so-called “France ambassador to Yemen” has broken all norms and is working with excessive hostility against the Yemeni people.”

He added, “Some interpreted this as the existence of a physiological defect that generates disorders that make him appear as an abnormal person,” pointing out that the French ambassador in any case reflects the horrific level of deterioration in French diplomacy.

“I think France deserves to reinvent itself in a better way,” Al-Ezzi said.

This statement comes in response to the visit of the French Ambassador, Jean-Marie Safa, two days ago to the city of Mukalla in the Hadhramaut governorate, during which he met with a number of US-Saudi mercenaries’ leaders to discuss the resumption of the “looting” Yemeni liquefied gas from Balhaf facility in the occupied governorate Shabwa, which is controlled by the forces of Emirati occupation.