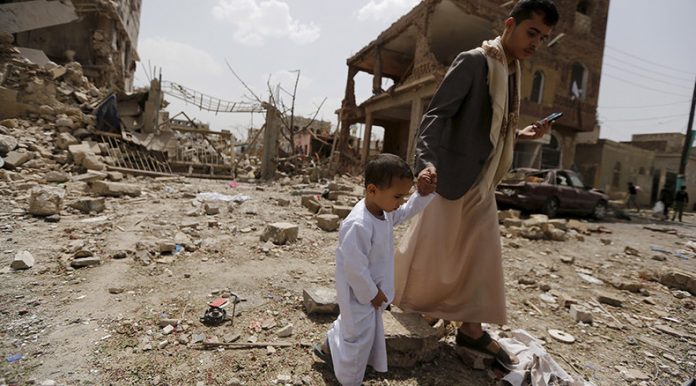 Who can imagine that the declared as the worst humanitarian catastrophe in the world by the UN is witnessing the departure of humanitarian organizations?

Yemen, the poorest Arab country, has been under attack by the Saudi-led coalition since March 26th of 2015.

The war is said to be taking place in an attempt to restore a Saudi-friendly president, who was ousted by Ansarullah, also known as Houthis.

After the brief introduction into Yemen’s war, here is why Yemen is not only neglected by the uninterested world, but also has no option but to stand on its own two feet despite the Saudi war and its imposed strangling blockade.

The Red Cross announced it has withdrawn its staff from Yemen due to security threats and in response to the assassination of one of its occupants by gunmen in Taiz province, central Yemen.

The International Committee of the Red Cross (ICRC) has withdrawn its 71 staff from Yemen because of security threats and in fears of a repeated armed attack targeting its mission in Taiz, in which its Lebanese employee Hanna Lahoud was killed.

“The ICRC has been working in Yemen since 1962, but we are witnessing dangerous trends these days,” the ICRC said in a statement.

“We have been prevented from performing our current activities; we have faced threats and even direct attacks in recent weeks. We see a strong desire to exploit our Organization to be a pillar in the course of the conflict. The ICRC holds all parties responsible for the security of its staff,” It added.

Zahra stands in the rubble of destroyed buildings in the south-western city of Lahj, Yemen.

“Although our mission in Yemen has received many threats in the past, we cannot accept today more risk exposure less than two months after the killing of one of our staff members Hanna Lahoud in the city of Taiz by an armed man. The security of our staff, who are being intimidated by the parties to the conflict, is a basic and non-negotiable condition for our presence and our work in Yemen, an absolute priority.

The ICRC called for realistic, robust and viable safeguards to enable it to continue its work in Yemen. It hopes that it will continue to spare and alleviate the suffering of people stranded in conflict, but that all parties to the conflict must agree on a strong guarantee.

“For more than five decades of work in Yemen, the ICRC has helped victims of armed conflict and violence, including displaced persons, families of missing persons, detainees, landmine victims and those in need of health care in Sana’a, Aden, Taiz, Saada and Hodeida. The activities of the ICRC are based on the principles of neutrality and impartiality, focusing on the needs of victims and pursuing the same approach with all victims,” the ICRC stressed.

A malnourished Yemeni child receives treatment at a hospital in the Yemeni port city of Hodeidah. YemenExtra.

According to observers, the decision to withdraw the staff of the Red Cross came after intelligence warnings of repeated crime that aims for the mission similar to the previous crime, which killed Hanna Lahoud in Dhabab area west of the city of Taiz.

The death toll from the Saudi-led war on Yemen so far is estimated at about 10,000. A Yemeni life has become wretched and perilous, on a mass scale. UN officials stated that an alarming three-quarters of Yemen’s 28 million people need outside back up to stave off hunger and disease, and half of those require it urgently to survive. Of an estimated 1.8 million children under age 5 who are severely malnourished, 400,000 are acutely underfed they are at 10 times the normal risk of dying.

Addressing another humanitarian withdrawal from Yemen, MSF accused the Saudi-led coalition of targeting one of its cholera treatment centers in Yemen on Monday, announcing the temporary suspension of its activities in the center.

The organization said on its Twitter account that the attack took place Monday morning, bombarding the cholera treatment center in the district of Abes in the province of Hajjah without reported casualties.

“The attack by the coalition shows a complete lack of respect for medical facilities and patients,” the organization said. “Whether intentional or negligent, this is totally unacceptable.”

The organization said it had decided, as a result of the attack, to temporarily suspend its activities in Abes district to ensure the safety of staff and patients, and posted photographs of the debris at a site that appeared to have been hit by an air strike.

Many of the humanitarian organizations announced their withdrawal from Yemen because of the continued targeting of their centers.

The countries of the Saudi-led coalition are said to target the health centers and humanitarian organizations as part of its project to exacerbate the humanitarian situation in Yemen.

Furthermore, the people of Yemen in several governorates are suffering particularly from a lack of health care.

“The health system is on the brink of collapse,” says Dr. Ahmed Shadoul, the World Health Organization (WHO) Representative for Yemen.

Moreover, intense Saudi attacks on Sa’ada caused the destruction of the ICRC Maran health clinic. “There were 18 airstrikes in Sa’ada during the first week of September,” says Hassan Boucenine, head of the MSF Yemen Mission… “It was unbelievable. The team [of health workers] had to hide inside the hospital.”

Meanwhile, access to health services is retrograding in other parts of the country too, including Hodeida and Hajjah governorates, where the majority of the internally displaced have escaped, as well as in most others including Hadramout, Aldhaleh, and Abyan.

In addition to restricted access to health facilities, there is a severe shortage of medical supplies and equipment and Yemen’s health system is highly dependent on what WHO and its humanitarian partners can provide for the country, although they would not be capable of eliminating the shortage sufficiently.

In the same context, the Saudi-led coalition has also been accused of targeting a boat affiliated with the United Nations after it departed from the Yemeni port-city of Hodeida. The boat was leaving Hodeida port when it came under attack by the Saudi-led coalition warships in the Red Sea. According to local reports, the UN boat was then taken to an unidentified location.

In conclusion, the three-year Saudi war on Yemen has not even excluded humanitarian organizations such as ICRC and MSF from its to-target list.