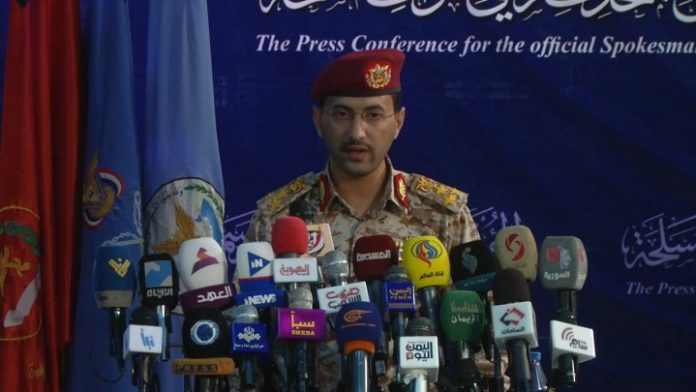 The spokesman of the Armed Forces, Brigadier Yahya Sare’e, on Saturday, revealed a new statistic for the US-Saudi aggression against Yemen in four years.

The aggression launched more than a quarter of a million air strikes and dropped more than five hundred thousand missiles, bombs and artillery shell, including 6000 thousand cluster bombs on Yemen, Brigadier Sare’e said during a press conference  held in Sana’a

At least 2951 light bombs, 3721 sound bombs and dozens of fragmentation bombs were launched, he said, adding that the naval shelling of the battleships and warships exceeded six thousand rockets.

He pointed out that Yemen has accurate details on how each country is involved and will be disclosed in a timely manner. He stressed that the US role in the aggression against Yemen is clear as a leading and directing role, and that Israeli participation does not need more evidence that the Israeli leaders and the media admitting.

Brigadier Sare’e confirmed that the US-Saudi aggression committed the most brutal massacres and destroyed the infrastructure to achieve its goals in Yemen, pointing out that the raids and bombing of the aggression have killed tens of thousands of citizens, including women and children. He pointed out that all the Yemeni People were affected directly or indirectly by the aggression and siege.

He also stressed that Yemen is capable of launching dozens of domestically-designed ballistic missiles simultaneously on aggression, and that the military manufacturing unit is constantly evolving the domestic industry.” We have ballistic missile systems able to hit targets accurately without being intercepted by enemy systems” He confirmed.

Armed Forces spokesman said that the Air Force operations started during the second year of the aggression, pointing out that the operations of the manufacturing and producing are continuing and subjected to constant development processes.

The Air Force has carried out 164 operations, and 1,362 surveillance and monitoring of enemy targets. He pointed out that we have aerial photographs and coordinates of dozens of headquarters and military bases of the enemy. “The legitimated targets of our forces extend to the capital of the Saudi regime and to Abu Dhabi,” he added.

General Yahya Sare’e, said that the Engineering Unit and the Anti-Armor Unit have succeeded in executing nearly nine thousand quality operations. He stressed that the Engineering and Armor Operations destroyed at least seven thousand armored, military machinery and bulldozers, pointing out that the Army Media documented over 5069 machinery and armored vehicles destruction. He pointed out that most of the enemy’s destructive machinery in Yemen are American, British and French made.

Brigadier Yahya Sare’e affirmed that the Air Defenses have succeeded in downing 19 Apache helicopters in the 4 years, while more than eighty-six missions were successfully dealt.