Anti-war organizations in Germany have launched a new campaign titled “Action Outcry – Stop Weapons Trade”, in order to expose the role of German weapons dealers in the wars against Syria and Yemen.

Posters depicting the invasion in Afrin and the war in Yemen’s Aden and Saada provinces were made in order to draw attention to the cooperation between German weapons manufacturers and the invading nations of Turkey and Saudi Arabia. 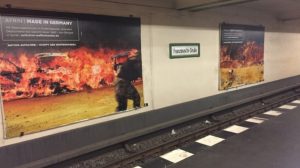 Furthermore, the posters show the Turkish army and their allied gangs setting fire to a car in Afrin, Syria, a burned down house in Aden and a child victim of the war in Saada.

These posters were put up on the Französische Straße metro station in Berlin, close to where the government buildings are situated. The posters will stay up until June 17, exposing to the German public how the weapons trade affects the rest of the world.

The campaign aims for an embargo that would ban weapons sales by the Federal Government to countries like Turkey and Saudi Arabia, as well as other countries engaged in offensive wars.