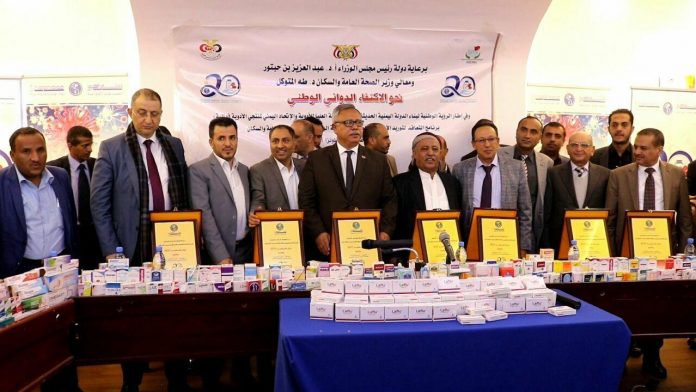 Speaker of the Parliament Yahya Ali al-Ra’i and Prime Minister Dr. Abdulaziz bin Habtoor on Monday attended the launching of the contracting program for supplying medicines between the national pharmaceutical industry and the Ministry of Health, starting by supplying H1N1 flu medicine.

At the inauguration ceremony, al-Ra’i praised this program, which enhances the vital role of the private sector working in the field of drug manufacturing during this exceptional period that Yemen is going through as a result of the aggression and the blockade.

Al-Ra’i referred the Parliament’s Presidency had added a paragraph to the law in force that includes exempting pharmaceutical manufacturing inputs, in implementation of directives of President of the Supreme Political Council.

In turn, the Prime Minister expressed thanks for the great efforts made by the Parliament in supporting the government and its legal and institutional activities.

Dr. bin Habtoor noted the development witnessed by “Shaphaco Pharmaceutical Industries” company and the remarkable shift in its productive activity, which was crowned by the production of H1N1 flu medicine, as the first national company to manufacture this important medicine.

He pointed out that this manufacturing activity requires all authorities to care for these institutions that provide vital services to people, expressing his high appreciation for the free medicinal doses provided by drug manufacturers for people with chronic diseases.