Home Reports Sayyed Nasrallah: Everyone will be asked on the Day of Resurrection about... 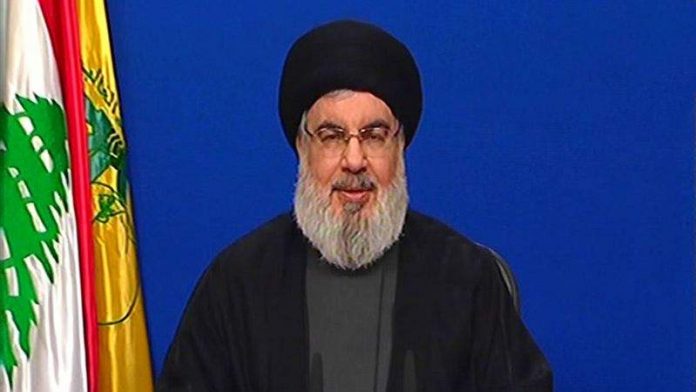 Hezbollah’s Secretary General Sayyed Hassan Nasrallah confirmed that there is no bargaining in the release of agent Amer al-Fakhouri, explaining that since the beginning of his arrest, US pressure has begun strongly on most state officials.

“It is our responsibility to raise the voice in the face of the arrogant Trump, and on the Day of Judgement everyone will ask about Gaza and Yemen that is being left to cholera, and about the more than 80 million Iranians trapped by American tyranny,” Nasrallah said.

Nasrallah added that the world is fighting the war on the Corona, the siege of Yemen and the denial of the entry of medicines and food to Yemen has not stopped.

In a speech about the latest developments, Nasrallah pointed out that the need to talk about the subject of the Israeli agent Amer al-Fakhouri.

Sayyed said: “It is not acceptable to question the resistance’s credibility and slurs and insults are rejected, especially when they come from friends. Let he who crosses these limits out of our friendship circle.

“This resistance is the noblest and the most rational in the modern era,” he said, pointing out that “It’s greatly distressing that a day have come on which I have to defend Hezbollah over the issue of an “Israeli” agent who had tortured our brothers and sisters. We have swallowed the harm and insults but from now on, we in Hezbollah will not allow a friend or ally to accuse, insult or launch treason accusations against it,” he added.

On the Coronavirus, Sayyed Nasrallah stressed that “Strict measures must be taken in relation to the Coronavirus and the formation of social frameworks is a must to pressure those who violate them.”

“We are ready to help in this battle with all we can,” he reiterated, noting that “It’s shameful and insulting to treat the spread of Coronavirus on the Lebanese sectarian equation: 6 Vs 6. In this war, there are parties that act racially.”