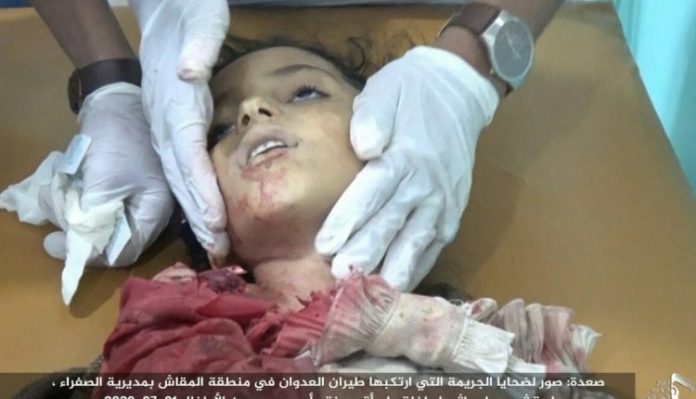 The United Nations Security Council, at its last session to consider the implications of the decaying FSO Safer oil tanker which has been anchored off Yemen’s coast of the Hodeidah province for decades, ignored the Saudi-led coalition’s horrific massacres against civilians and children in Yemen.

Ahead of the Security Council session, the Saudi-led aggression targeted civilians in Al-Masafa area, east of Al-Hazm district, in the northern Al-Jawf province, where 31 people were killed and wounded, mostly children and women. However, the crime did not even get condemnation by the Council to drop its legal and moral responsibility.

Despite the appeals previously made by Sana’a to address the FSO Safer oil tanker problem, the Security Council did not move a finger, while the response of the Council was swift, as soon as the countries of coalition decided to speak about this issue.

At a time when members of the Security Council expressed their concern and deep annoyance at the leaking of a tanker carrying one million and one hundred thousand barrels of oil, the blood and body parts of the Yemenis targeted by missiles and brutal bombs were outside the council’s accounts, whose members decided to preserve only marine life and coral.

In conjunction with the Council’s concern about the floating tank, on July 15, 2020, coalition warplanes were committing a new crime in the Al-Jawf province in eastern Yemen.

This crime was preceded by a similar massacre targeting a citizen’s house in Washha in Hajjah governorate, leaving ten people dead and two others injured, all of them women and children, in addition to wounding three other children.

The bombing that targeted the family of Nayef Megali in Hajjah was caused by a banned US-made bomb, laser-guided MK 82 grenade, that weighs 227 kilograms, similar to the bomb that targeted a school bus in Dahyan, Sa’adah province in 2018.

On the 2nd of July, the Saudi-led aggression intensified its air strikes on Sa’adah province, killing two citizens and injuring four others, among them children and an elderly woman. This massacre came only 15 days after the coalition’s fighter jets targeted a car carrying civilians from the Razih Market in the highway of the Shada district, killing 13 , including 4 children and a woman.

Certainly the Security Council silence and the timid condemnations of the United Nations represent the coalition’s greed to continue its massacres, to scatter the corpses of children and women and demolish their homes on their heads without guilt.

This silence was invested to speak about the Safer oil tanker, which is considered by the Security Council and Member States to be an important issue, as the Red Sea represents the biggest problem, while the red blood of civilians in Yemen is not equal to one liter of oil that attracts the world’s attention. The war on Yemen does not represent any issue or tragedy in general for war traders.