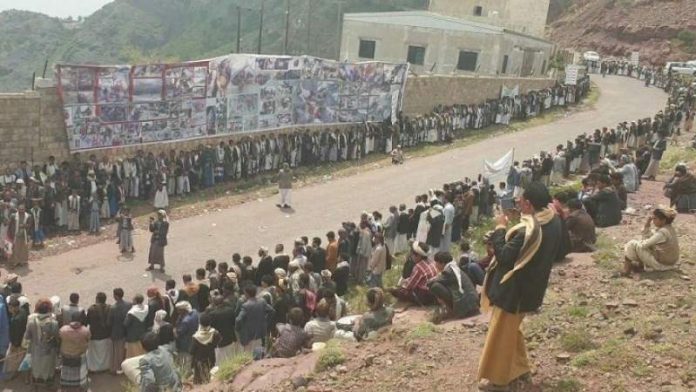 A tribal meeting held in Kuhlan Afar district of Hajjah province condemned the continuation of the aggression coalition in committing horrific crimes against the Yemeni people in a flawed international silence.

In the presence of the deputy governor Dr. Taha al-Hamzi, the meeting denounced that the aggression warplanes intentionally targeted the civilians’ homes in Weshha in Hajjah province and al-Mesafah in Jawf province as well as the crime committed by the Islah party militia against the Suba’yan family in Wadi Abedah in Marib province.

The meeting called for a public mobilization to strengthen efforts to continue to provide the fronts with funds and fighters until achieving victory as well as to respond to these crimes and liberate the occupied areas from the invaders and their mercenaries.

A statement issued by the meeting held the United Nations, the Human Rights Council and humanitarian organizations fully responsible for reneging on their responsibilities towards the crimes to which the Yemeni people are subjected to.