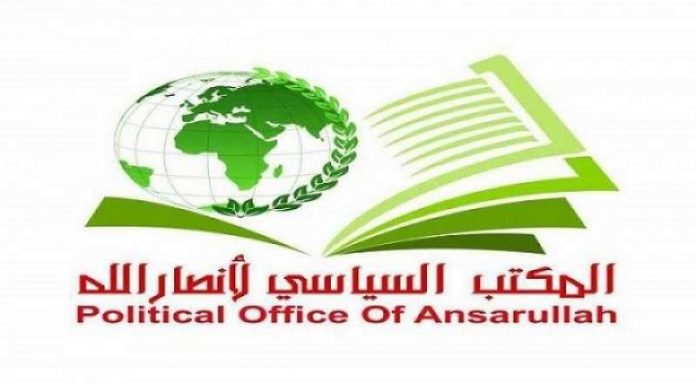 The Political Office of Ansarullah confirmed that what the UAE undertook of overt normalization with Israel is a total betrayal of the Palestinian cause and letting the Zionists and the Americans achieve their project aiming to destroy the region.

The Political Office of Ansarullah said in a statement issued today, Friday, that the exposure of the Emirati-Israeli ties in this way proves that all those Arab and Islamic slogans raised by the coalition of aggression against Yemen were untrue and that the UAE, as well as Saudi Arabia, are merely Israeli-American claws tearing the body of the Arab and Islamic nation. Additionally, the statement stressed that the UAE continues back up the wrong side and has been since its inception in the service of the American and the Israeli governments against the Arab nation, including its aggressive military campaign on Yemen.

The Political Office of Ansarullah indicated that the peace, prosperity, and stability that are being promoted after the UAE deal with Isreal are nothing but an illusion. This was previously proven with the regimes that preceded the Emirates in normalization with the Isreal and plunged into various crises and innumerable problems.

The Anar Allah Political Office called on the Arab and Islamic people to “shake off the dust of defeat” from themselves and raise their voice loudly against the hypocrisy and betrayal of all who betrays the nation, calling to isolate every regime that declares normalization with Israel and also boycotting it economically and commercially. The Bureau emphasized that the Arab and Islamic peoples can do a lot to Palestine.

The Ansarullah statement also urged the Islamic and Arab nation to trust in Allah and act regarding this matter responsibly and willingly, as well as to be ready to sacrifice, and trust in the Arab and Islamic liberation project represented by the Islamic resistance, blessing the nation for the historic victory achieved by the Hezbollah Islamic resistance in Lebanon and its Secretary-General Sayyed Hassan Nasrallah. However, the statement assured that the nation will never find peace unless it confronts the project of the US and Zionists through an Arab-Islamic liberation project that would achieve peace for Palestine and be victorious for Islam and Muslims.