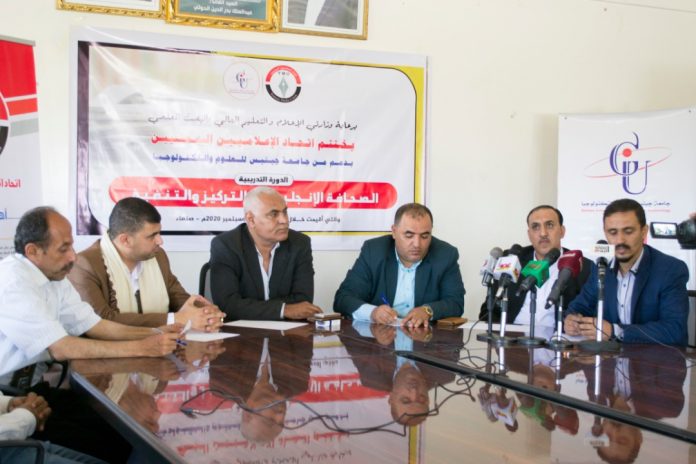 The Yemeni Media Union (YMU), with the support of the Guinness University of Science and Technology, has concluded a training course in English journalism named “Focus and Act” in the capital Sana’a on Thursday.

At the conclusion ceremony, Deputy Minister of Information Fahmi Al-Yousifi confirmed his keenness to develop the capabilities of the media cadres in various aspects, in order to convey the grievances of the Yemeni people to international public opinion.

“The word is a supplementary weapon to the military and economic front,” al-Yousfi said. He noted to the importance of the media’s role in opposing the media machine of the aggression countries, and exposing the crimes and massacres committed by Saudi-led coalition against the Yemeni people for the past five years.

For his part, Deputy Minister of Higher Education and Scientific Research, Dr. Ali Sharaf al-Din, said that the media possesses a weapon that must be activated in the face of the challenges that the aggression coalition imposed on the Yemeni people.

He added: “Today, the war has become a civilian matter, and is not limited to the military side.”

In turn, Vice Chairman of the Board of Directors of the Yemeni news agency Saba and Deputy Editor-in-Chief in charge of training and qualification at the YMU, Mohammed Abdulquddus al-Sharei, referred to the importance of English language journalism in the light of the current situation that the country is going through.

At the conclusion, which was attended by YMP’s President Abdullah Sabri, Secretary General of the Union Hassan Sharaf al-Din and representative of the Guinus University, Hassan al-Wareeth, reviewed the objectives of the course, in which the trainer Nasser al-Rabiei lectured, with the aim of developing the capabilities of 15 media professionals from various national media institutions.

They considered the organizing of the course as a positive step towards strengthening coordination between the Union and the University, and the real partnership for training media cadres in various fields, including the English press.

Sharaf al-Din and al-Wraith urged participants to apply their theoretical skills in the English press in field and practical reality, which reflects positively on performance and the transmission of the media message abroad in English.