Home Reports Anger in Moroccan Street at Normalization with Israel 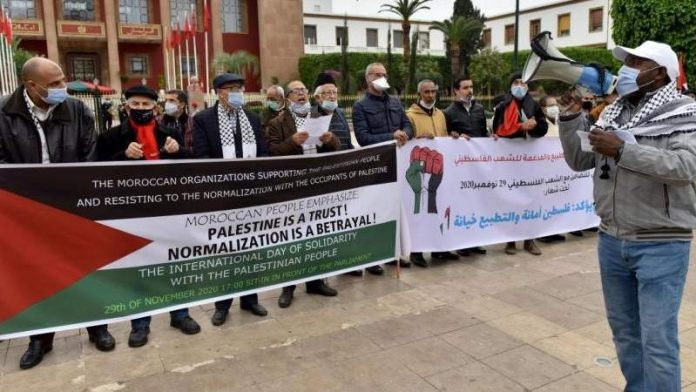 Morocco’s announcement, on Thursday, to resume diplomatic relations with Israel “with minimal delay” and work to reopen offices in the two countries, angered the Maghreb street.
Human rights activists in the Moroccan National Working Group to Support the Palestinian People’s Struggle hurried to hold an emergency meeting, immediately after the Royal Court announced the decision to resume official communications and diplomatic relations with the entity, in order to take a unified position on the decision.

For his part, the head of the Moroccan Observatory Against Normalization Ahmed Wehman declared that the National Action Group “categorically rejects any form of normalization with the usurping Zionist entity.

“We categorically reject any form of normalization with the usurping Zionist entity, which is plotting against Morocco’s territorial integrity and social cohesion and is working to break it up on ethnic grounds into 6 entities. It is something that we have exposed more than once,” Wehman Said.

In an interview with Al-Arabi Al-Jadeed, Wehman said, “Morocco’s sovereignty over the contested Western Sahara region does not need the Zionists to express its Moroccanness. Morocco is in its Sahara, and it is a reality with a historical, social and cultural dimension, as well as from a realistic view of things.”

He considered that the justification for normalization in the Sahara issue is an open and unacceptable matter, and it is a submission to blackmail in which the official side endured for years.

US President Donald Trump, who is due to leave office on January 20, tweeted on Thursday that “Israel and the Kingdom of Morocco have agreed to full diplomatic relations”, claiming that agreement would be “a massive breakthrough for peace in the Middle East!” As part of the agreement, Trump agreed to recognize Morocco’s “sovereignty” over the contested Western Sahara region.