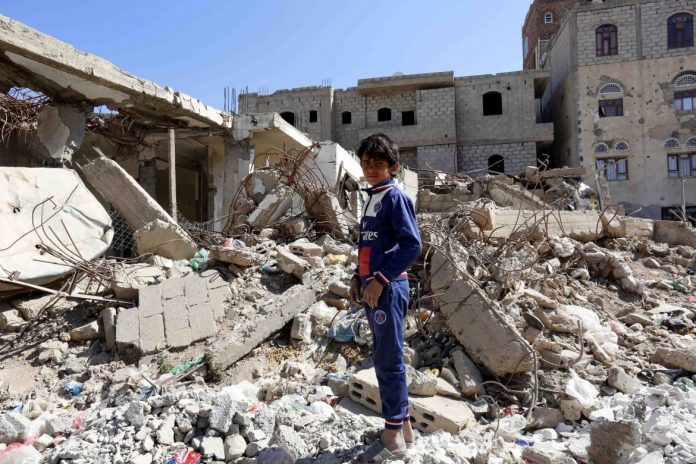 The move came during a joint meeting held for members of the Shura Council and the Ministry of Human Rights, to discuss the report on crimes and human violations of Saudi-led aggression, submitted by the Commission on Human Rights and Public Freedoms as well as various civil society organisations.

The report of the Human Rights Commission confirmed that unjustified attacks have affected thousands of civilians and led to the destruction of hundreds of thousands of homes, injuring and killing a large number of residents all over the country.

It  listed more than 80% of aviation sector workers lost their jobs due to the attacks, and the navigation guidance system at Sana’a Airport was destroyed.

The report documented the targeting and bombing of centers used for treating disabilities, which resulted in many serious injuries and a grave psychological impact, as well as the killing of a number of residents of the centers.

Many of them got stuck inside targeted buildings due to their inability to move and evacuate quickly.

The report pointed out that as a result of the blockade the poverty rate rose to 80%, the unemployment rate is at 65%, and more than 60% of Yemenis suffer from starvation.

The report indicated that the discontinuation of of state employees salaries impacts a total of 1.25 million employees, who support 35% of the population.

The relocation of the Central Bank caused a great shortage in jobs as heads of households lost the ability to provide food and medicine. The report pointed out that about 30% of those stranded outside Yemen were unable to enter Yemen due to the closure of Sana’a International airport.

The Committee documented the total and partial destruction of more than 2,023 public facilities and 11 branches of the Social Welfare Fund.

It documented the aggression’s destruction of more than 1,030 sites, facilities, and a civil telecommunication networks, as well as the destruction of 538 installations, networks and power stations, and the killing of 383 employees in the electricity sector.

Moreover, it documented the total and partial destruction of 41 complexes and governmental buildings belonging to the judicial authority’s, and the martyrdom of a number of judges, most notably Judge Yahya Rubaid.

The Commission furthermore reported the destruction of more than 1,324 mosques, more than 417 historical and archaeological monuments, and more than 364 tourist facilities, 47 audio-visual and legible media institutions and 131 sports facilities.

In terms of the petrochemical industry, 472 facilities, stations and oil and gas tankers were destroyed by the aggression, resulting in the destruction of 163,000 household gas cylinders and the obstruction of the repair of the floating Safer oil reservoir off the coast of Hodeidah.