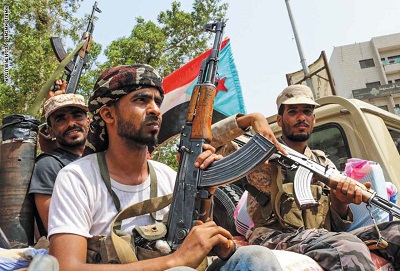 The UAE-backed Southern Transitional Council (STC) militias continued their crimes against Patients who want to travel through Aden airport, where they kidnapped Salafist Sheikh Ali al-Okam while on his way to travel abroad for treatment in Egypt.

They indicated that the UAE-backed militias carried  out raids on Aden hotels to search and kidnap citizens who have to travel through Aden airport for treatment outside the country, and take them to unknown places.

The Sources confirmed that pointed out that al-Okam, who was kidnapped yesterday, has no political or sectarian ties and is a Salafist sheikh who advocates coexistence and unity of class.

A source close to Sheikh Al-Okam confirmed to “Al-Thawra Newspaper” that Al-Okam suffers from heart disease and has performed a catheterization operation and the installation of braces, and that he was heading to Cairo on a therapeutic trip.

The STC mercenaries continue to arrest, kidnap and interrogate any citizen belonging to the northern provinces.

In addition, security and local sources in Aden said that a violent explosion rocked Al-Mansoura district on Thursday night.

They reported that the explosion took place near ‘Al-Mashrea’ ‘camp in Al-Mansoura, and was followed by heavy gunfire..

Earlier on Wednesday, a sticky bomb exploded and targeted the vehicle belonging to the Colonel Mohammed Commander Aweidha, director of al-Drin police station. The explosion left the colonel wounded along with his son. They were taken to hospital.