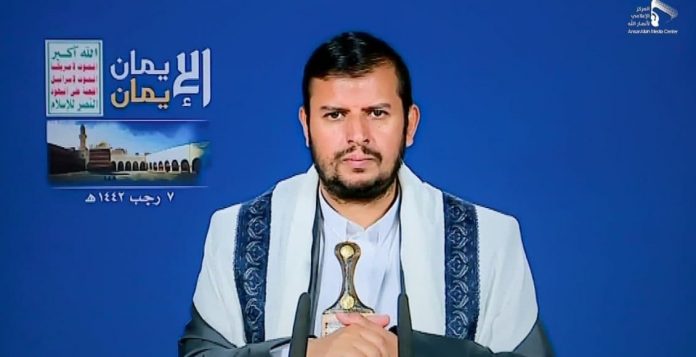 Revolution leader Abdul Malik Badr al-Houthi has called for continuing to confront aggression based on the duty of faith, humanity, and patriotism.

On the occasion of ‘Friday of Rajab’ which ‘the Yemeni people converted to Islam’, the Revolution leader called on the aggression coalition to stop its aggression and lift its siege on Yemen, adding the problem is in aggression and siege.

” Our position is a position of right and justice by all humanitarian, moral, and international standards,” al-Houthi said.

He noted that the memory of Friday of Rajab is a white page for the pages of the Yemeni people and one of the major achievements that led to the great historical shift in the religious trend.

“We congratulate our people for belonging to the identity of Islamic faith, which is the best identity for any people and nation and we must consolidate this identity for future generations,” al-Houthi said.

The revolution leader pointed out that the choice of faith is the solid ground to build a real reality of what Allah wants for human beings to achieve the greatest results and avoid losses and mistakes.

Al-Houthi pointed out that those who choose the state of deviation in order to obtain material gains may push the human being to stand in the ranks of falsehood and carry out prohibited acts without achieving their goal.

” What is achieved by faith is a good life in this world, a happy and eternal future and safety from eternal loss or any forms of enslavement in the hereafter,” al-Houthi said.

“The state of faith in our Muslim society is supposed to be the fundamental condition in which we move to consolidate it and educate our generations on it,” he added.

He made clear the movement of hypocrites in the Islamic arena is deceptive, and they [hypocrites] are working to corrupt this arena under the slogan of reform, pointing out that the presence of hypocrites at this time is in the form of regimes, governments and entities are working to destroy the identity of faith.

“The hypocrites’ movement is working to undermine religious identity on the moral side through corruption and dilution of Muslim communities in the service of Americans and Zionists,” al-Houthi said.

He went on saying the takfiris, who present a brutal image of Islam, and who spread immorality and vices, are two trends working for the Americans and the Israelis.

Abdul Malik al-Houthi stressed the importance of consolidating the Islamic identity in all its moral aspects and at the level of moral attitudes and trends.

“The great dangers are directed towards us and the source of it is the movement of hypocrisy in this nation, and we, as a Yemeni people, must remember the saying of the greatest Messenger Mohammed peace be upon him and his companions,” Faith is Yemeni and wisdom is [also] Yemeni,” he said.

No matter what Normalizers [those who rush to the arms of the Zionist entity] with the Israeli entity say about the enemy entity and justify their loyalty to it, these are flimsy justifications,” he added.

The leader of the revolution stressed that the aggression against the Yemeni people comes in the context of Yemen’s desire for freedom and salvation from dependence on the enemies of the homeland and guardianship.

Al-Houthi pointed out before September 21 revolution, there was foreign tutelage, headed by America; America and Israel are two sides of the same coin.

He stressed the United States of America’s priority is to empower Israel in the region so as to consolidate its control and supremacy in the region as well and to make it the leader of what it is called by them “the Middle East.”

Guardianship is contempt and an insult to our people, and those who accepted tutelage and promoted it and stood with it when our people rejected it and supported the aggression and today are fighting with the foreigner [aggression].”

“The enemies wanted to control us, and we are a people whose identity is faith, and we want to be free from American hegemony and its tools,” he added.

“We do not want to be under the tutelage of Saudi Arabia, the Emirates, America, Israel, or any foreign country. We are free, and our faith identity is imposed on us too, al-Houthi said.

He stressed that the battles in Marib, Jawf, Bayda, Taiz, and Hodeidah are against the aggressor who fought our people because it wants to control Yemen.

“Our battle in Marib or any other provinces are not with the people of these provinces, they are our partners in the faith identity and most of the people in Marib are honest and free,” he said.

He explained that very few people from Marib are fighting under the command of a Saudi officer and are trying to impose Saudi control in the framework of loyalty to America and normalization with Israel.

The leader of the revolution added ”the atmosphere in which our people live is fraternal, linked by a common faith identity, and this is the most sacred bond”.

The revolution leader pointed out that the Yemeni people have had an authentic faith extension throughout history up to the Messenger of Allah, and the takfiris see the Yemeni people as infidels except for those who joined Wahhabi sect.

He wished for the good of the people of the nation and especially the Palestinian people, praising the principled position in which the Yemeni people, represented by the army and popular committees, are confronting American hegemony and standing with all the oppressed of our nation.