Home Reports Ministry of Human Rights: More than 43,000 Yemenis killed and wounded since... 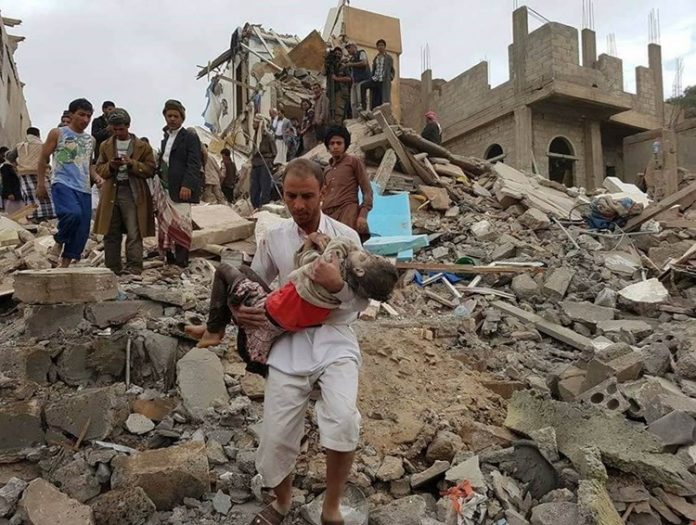 The Yemeni Ministry of Human Rights, at a press conference held on Thursday in the capital Sana’a, has released its sixth official report on the Saudi-led aggression’s crimes in Yemen.

The ministry confirmed that the coalition is deliberately starving civilians, explaining that 16.2 million people suffer from food insecurity, and more than 1.25 million employees have been deprived from their salaries, while the poverty rate has risen to 85% and the unemployment rate to more than 65% as a result of the Saudi aggression.

The ministry report stated that the Saudi-led aggression has launched tens of thousands of military attacks that have killed and wounded a total of 43,582 citizens directly, including 7,999 children and 5,184 women, indicating that the aggression caused the displacement of 4,509,328 citizens.

Regarding to targeting commercial establishments, factories, production and agriculture, the report indicated that the coalition has targeted 13,742 fields, warehouses and agricultural sites, noting that 441,605 livestock and more than 30 horses were killed, as well as 41,610 beehives burned as a result of the bombing of the aggression.

The report stated that the aggression destroyed 2,409 financial facilities, burned 4,718 fishery landing centers, as well as deprived more than 40,000 fishermen from access to their profession of fishing.

The aggressiion destroyed 349 production factories and 5 grain silos, 539 establishments and an electricity network, killing 383 workers there, as well as 2,072 facilities and a communications network in which 69 employees were killed. Over 679 supermarkets and 11,154 shops were destroyed in the past six years, the ministry explained.

With regards to the service sector, educational and health facilities, the Ministry stated that the coalition destroyed 523 health facilities and burned 92 ambulances, making over 19.7 million people suffer in dire need of healthcare.

The Saudi-led aggression destroyed 3,784 educational facilities, including 65 technical institutes, and deprived 4,435,409 students of their education.

Finally, the ministry’s report indicated that the coalition has destroyed 49 judicial facilities, targeted 48 homes of judges and judicial employees, and killed 18 judges and 40 administrative employees.

About 132 sports facilities, 4,370 roads and bridges, were destroyed by the aggression  airstrikes ,as well as 2,034 public services for citizens, and 11 branches of the Social Welfare Fund.