The Human Rights Office in Hodeidah province  has on Thursday organized a press conference, in which it revealed the total losses inflicted by the US-backed Saudi-led aggression on the coastal province.

At the conference, the Director of the Human Rights Office in Hodeidah, Zain Abdullah, explained that the total economic facilities that were targeted by the aggressors amounted to more than 4,255 facilities, which included factories, fuel trucks, commercial facilities and farms, in addition to means of transportation, fishing boats, food stores, markets, gas stations and food trucks.

He also confirmed that the violations of the Saudi-led aggressive coalition against the truce agreement exceeded 170,000, resulting in the deaths of more than 5,394 civilians, including women and children. 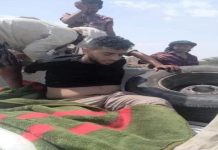