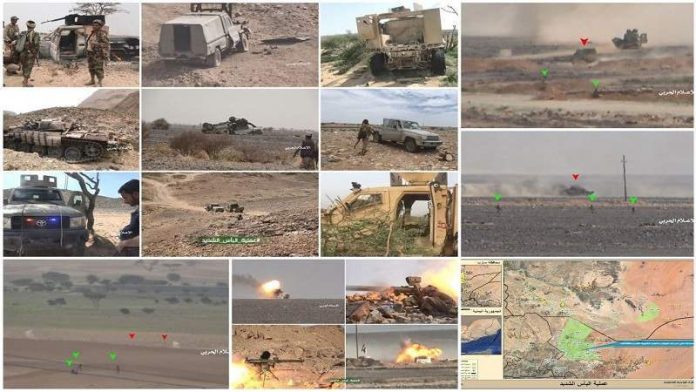 The spokesman of the Yemeni Armed Forces, Brigadier General Yahya Sare’e, revealed on Friday afternoon a military operation dubbed Al-Bass al-Shadeed, carried out by the army forces and the Popular Committees in Marib province.

“The operation lasted for several months, and achieved its goals successfully,” Sare’e said during a press conference, adding that the mercenaries were kicked out of the liberated areas.

“The Yemeni Armed Forces started a new phase of liberating Yemen from invaders and occupiers, opened new paths, and followed tactics that suit the military operation’s geography,” the spokesman said.

“The Missile Force and the Air Force carried out dozens of successful military operations, 128 of which took place inside Yemen and 33 others carried out in the Saudi depth,” Sare’e added.

Badr, Nakal, Qassem, Zukfiqar, and Quds-2 type missiles were used during the series of operations.

Furthermore, Yahya Sare’e explained that the engineering and anti-armour units played a major role in this battle.

Among the most important results of the Operation was the capture of huge amounts of heavy weapons.

The duration of the operation extended from March 2020 to November 2020, in which 3,000 members of the enemy forces were killed, 12,400 sustained injuries, and 550 others were detained.

“Our forces managed to liberate around 1,600 square kilometers of Ma’rib during the operation,” Sare’e said, naming in particular the directorates of Medghal and Mejzar.

Additionally, among the most important results was the liberation of the Mas Camp, one of the biggest bases that have been used by the invaders over the past years.

Yahya Sare’e hailed the role played by the people of in Marib during this operation and others, stressing that “the armed forces will continue to liberate all Yemeni territory.”