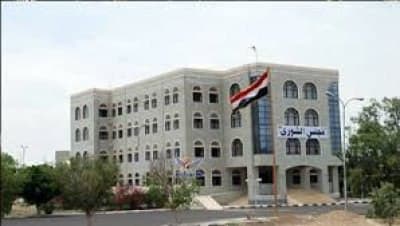 The Shura Council condemned on Tuesday the double standards policy pursued by the UN Security Council in dealing with the issue of peace and war in Yemen.

In a statement, the Shura Council denounced the Security Council’s continued condemnation of the legitimate right of the Yemeni people to defend themselves and the sovereignty of their country.

The statement referred to the Security Council’s silence on the Saudi-led aggression coalition’s war crimes and crimes against humanity that the Yemeni people are being exposed to, including the bombing with internationally prohibited weapons, the suffocating siege for seven years, and the prevention of critically ill cases from traveling abroad.

The Shura Council considered that the Security Council lacked the minimum level of balance and fairness in its handling of the Yemeni file, which does not build trust, does not help achieve peace, and encourages the other side to continue committing more crimes.

Shura’s statement affirmed that the continued adoption of this unfair policy and the clear bias of the aggressors on Yemen would exacerbate the deterioration of the humanitarian situation and increase the suffering of more than 25 million citizens in light of the shameful silence of the international community.