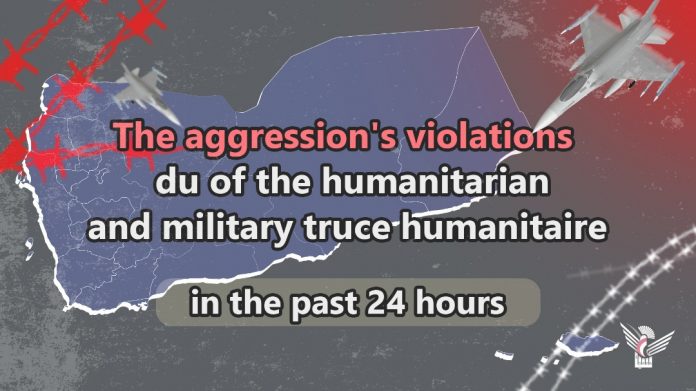 The US-backed Saudi-led coalition forces and their mercenaries committed 118 violations of the UN-brokered humanitarian and military truce during the past 24 hours, the official Yemeni news agency Saba reported, citing a military source on  Monday.

According to the source, the coalition’s  violations included dropping three bombs by the armed reconnaissance aircraft on the homes of citizens and the sites of the army and popular committees in Al-Barah area in Taiz province, and one bomb in Bab Ghaluq area in Dhalea province.

The source pointed out that the violations included the flight of Apache warplanes in the airspace of Najran, and 30 sorties of armed and spying reconnaissance aircraft in the airspace of the provinces of Ma’rib, Taiz, Jawf, Saada, Dhalea, and Bayda, and the border fronts.

The coalition forces established combat fortifications in Al-Tarbil hill in Bir Bashat area in Taiz, Al-Boqa area in Najran, while 17 violations with artillery shelling on the sites of the army and the popular committees were recorded in Al-Wadi and Malaa in Ma’rib, Al-Jabal Al-Ahmar in Al-Hawamira, the eastern front in Taiz, Haradh district of Hajjah province, and Al-Malahidh area in Saada.

The source pointed out that the intensive artillery shelling also targeted the positions of the army and the popular committees in Al-Amoud and Al-Khouba in Jizan.

He added that 66 violations were recorded by shooting at citizens’ homes and positions of the army and popular committees in Ma’rib, Taiz, Hajjah, Dhalea, and Bayda and the border fronts.